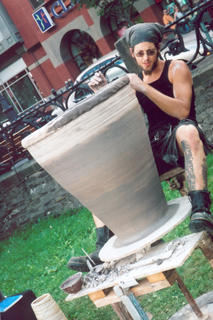 The most incredible demonstration at the labour day weekend 2005 nb crafts festival was Lee orus Clark, performance potter. This is a photo of him adding clay to the top of the pot while slowing spinning it. He used four 20-kilo pugs of clay over two days of performance wheel-building, spinning, with his 100 per cent manual foot-kick wheel to make this giant amphora-like vessel. 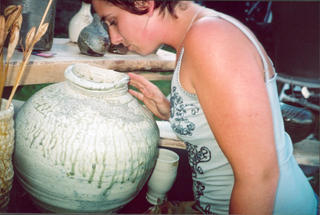 Amber, the festival coordinator, sniff-tested all of Lee's jugs, cups, jars, vases and vessels to determine which one, by smell, that she liked the best before considering a buy. 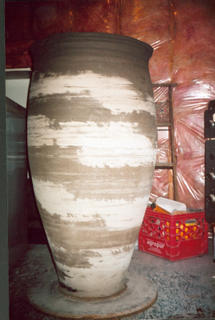 End of Sunday the pot, on its plywood base, was loaded into the back of Lee's pickup truck and, with Joel Hooper in the box sitting & holding onto the pot for the slow, careful drive to Liz's. It was offloaded into her studio-in-progress with the dead freezer, potter's wheel, and (so far) one of two electric kilns [that I'll likely end up wiring]. Lee has yet to come back for it, for the drive up the Trans-Canada Hightway with it, and for the long outdoor wood-firing it will need.