One week to Little Feat 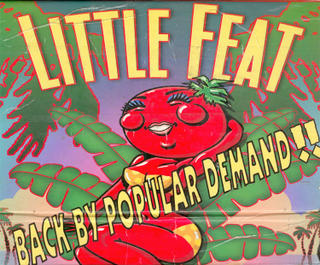 Just got off the phone with Ted outside Hubbards. I've purchased his Bud Lite Thursday pass for the two Little Feat shows plus. Yes, I received his cheque for the ticket. He's to arrive in town next Thursday. Midafternoon is his guess. With sleeping roll. Had originally planned to arrive on Wednesday but he's met a woman, a photographer and outdoor enthusiast, and they'll be starting ballroom dance lessons on Wednesday. When he arrives, I'll be in the FAA casemate with Corey Brown. Said to park his car in my artment space against the backfence, then walk to Barrack's Square on Queen Street and find me.

I don't know when my youngest sister & her husband arrive from Halifax. They're staying at Carriage House Inn. They're also here for acoustic and electric Little Feat shows (and for the sold-out Minglewood show on Friday and more). Liz also has a Thursday pass. The Acoustic Feat show starts at 6 with opening act Matt Anderson from Newfoundland.

Of course, the really incredible thing is that Little Feat will be performing live in Fredericton, New Brunswick! Can hardly wait for the shows. Have my Little Feat tickets and my media pass good for adtittance to 'most everything else.

Oh I'm so jealous! Should've got tickets, should've planned for Harvest Jazz this year. You'll all have an awesome time I'm sure.