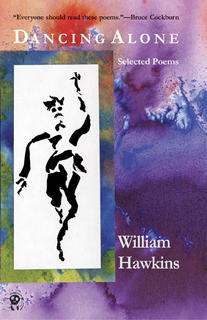 On 17 July I went into the den of Molly's Coffee House with Liz & Kel for Bill Hawkins in from Ottawa with his new book Dancing Alone: Selected Poems (Broken Jaw Press) in a special summer episode of Allison Calvern's Odd Sundays Reading Series. After Bill's reading was the customary open mic set. Both Kel and me got up and read some stuff. Kel read a section from a work-in-progress, a tough to read piece about an accident with a moose.

Ol' Marilyn is still the crazy, mad woman that she was in July. Yesterday was the first Odd Sunday of the new season (new uni year). I wasn't ever thinking of going because I knew I was working the craft fest. She came to, through, the parking lot gate that, at the time, I was working with photographer Joel. We took her toonie. She started a "Joe Blades . . ." shite rant. I cut her off. Bluntly told her, "Move it. Go. Else I'll call the cops. Go!" Thankfully, she went. Joel looked at me but I didn't really explain. Am so glad it wasn't Bree or Michelle or Sara or one of the other girls on the gate with me at that time.

Last night we closed Boom! After fleeing mad, crazy Marilyn . . . pawning a ring [to Molly] for beer, it seems. Went to Rye's. Marilyn was manic, paranoid, accusatory. She was the person who used to talk well of Fred Cogswell and others. Today she was attacking (except for over the top defence of Irving—K.C. and the sons [no mention of the daughter in PEI]. It was too weird and upsetting. We just had to get out. Went w/ Jar to Jester's Court, went to Boom! for Family Guy happy hour. Jar split. We went back to Boom! for the phat beats.

Marilyn was verbally attacking me. Accusing me of not publishing her poetry. Of laughing in her face about it. She went on and on. Froth flying as she talked. Has a real demented hate on for me. I've no idea if we've ever even talked about her writing, let along if I've ever seen or heard any of it. Certainly have no memory of ever seeing it.

Maybe she's off her meds, or needs to get prescribed . . . She's lost it. I'd never seen her like that before July. She was a mad loon. She was also getting into it with Molly. Let the two of them have each other, fight each other. Two crazies do not make a sane. If Marilyn continues verbally attacking me in public I'll have to look into getting a restraining order. Don't need to take shite like that from anyone. No one does.

OMG! You're freaking kidding me?! Mad Marilyn was at the Craft Fest? What is wrong with this woman? She is certifiable.

Marilyn is both frustrating and pitiful. Talk to her for five minutes and you KNOW she's not in her right mind. There's no way she can damage your name or reputation because well, she's not a credible witness.

Personally, I feel overwhelmingly sorry for her because while it's maddening when we get exposed to her vemon for a few minutes...it's her world. That's what her universe looks like 24/7.

At the same time, no sense trying to be rational. You handle it exactly the only way she can be handled. This is it. The way it is. No arguments. No reasoning.