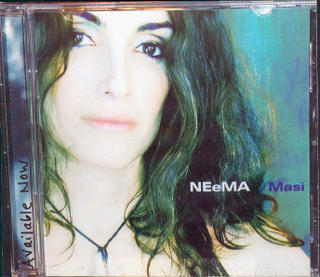 I met NEeMA at the 15 May 2005 edition of Ian Ferrier's The Words & Music Show at Casa del Popolo, Montréal, QC. NEeMA was one of the featured poet/performers that night: on guitar and vocals, with François Turgeon backing her up. She was looking forward to an Eastern Canada tour to give workshops and concerts at Cabot Shores in Indian Brook on Cape Breton Island in July-August and was looking for venues en route where she might perform. I got a copy of Masì that night for use on Ashes, Paper & Beans in advance of her tour. Later, she picked my brain for info on possible places to perform (and she did get venues in Fredericton, Eskasoni, Halifax, and elsewhere).

Was the first time I lucked into being in Montréal for one of Ian's organized events. Vince Tinguely helping him on the door, from behing an table covered in piles of mini-CDs, CD, books, chapbooks and flyers for upcoming events. Vince & I have known each other amost two decades—since the early days of the BS Poetry Society in Halifax. Ian, who has his own book+CD out has made videopoems and performs with Brio Trio, is president of the Quebec Writers' Federation, and lives across and several houses south of Hugh Hazelton on av Laval. Ian is also the publisher of Wired on Words audio/poetry CDs.