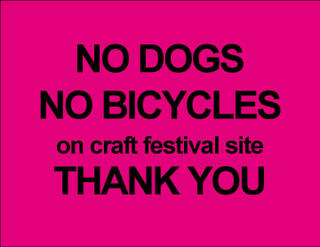 After the righteous and the indignant protest yesterday, I made instant "No dogs / no bicycles" signs for both gates first thing this morning with my laser printer: proof physical that we mean it, we can point to the sign, we can shrug our hands at protest, say "We're just the help—not the decision-makers." What happened yesterday will not happen today: no dog frizbee improve between the booths. Tales of a near dogfight on Friday. A kid being nipped. One weaver tells me a story of a show where a dog peed on a corner of her display and the woman with the dog there refused to even acknowledge that the dog had done anything.

Yesterday, I bought one of Maja Padrov's bowls. One with a glaze that looks like patinated copper—very cool, and unique [Most of Maja's work has a semimetallic orange glaze}. Larger than a regular soup or cereal bowl—this one should be so good for a pasta or large soup/stew. Great decorative handles. 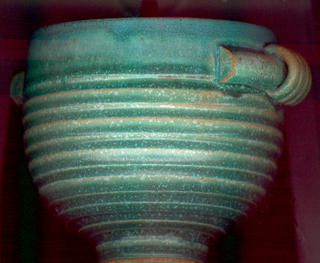 The outgoing pres chose to not wear the "end the joke . . ." earrings @ this morning's AGM. They're larger than what she normally wears, and she went hopefull, optimistic, that the situation wasn't . . . If I had an ear or ears pieced I would have sported one or two of them. I stepped in several times in the meeting to do procedural things or make motions to help move things along but I also ran out several times to ask people to leave the site and please come back once we were open for the day at 11 AM.

Elusive life new brunswick crafts "volunteer joe" is done: think it's been 33.5-hours onsite since Thursday afternoon. Chillin' Room played hours of great chillin' music this afternoon. It carried me along so great! I now feel that my skin is very dry. I feel sharper muscles, sore ache like they've done a lot of something (when they really, realy have!) My right thumbnail is cracked and my first finger still sore from the many hundreds, probably thousands of feet, of coated canvas in 45" lengths with wall-clips that I've unhooked these past three days. I feel a burning in the outer corners of my eyes. My hands, I don't know how to describe: dry, taut, half-numb palms . . . I'm so spaced I just looked again at a copy of the "no dogs . . ." sign and thought that "bicycle" was spelled wrong, and was instantly thinking: How bad is that? I can't even spell bicycle correctly. Yet I want to be out there riding one along the river outside the city limits where their bylaw does not require that I wear a helmet because I so want to feel the wind and the bike breeze in my hair, on my scalp and face, and not just be looking at it—river and bald eagle circling on thermals above—as I have these four days.

Had to deal with a passive vehicle accident today: one that I saw happen while working the back gate into the festival: a Honda CR-V's handbrake let go in the York-Sunbury Museum parking lot and, as three women {at least one of whom yelled, catching my attention, turning my head, to see them] with their kids were walking to their cars, with the CR-V rolling backwards down a slight sloped to bang, repeatedly, into the front of a parked Toyota Corolla CE [the front of the car bouncing up and down under the impacts] with a noticeable realignment of the Corolla's front bumper and paint scrapped by the CR-V's alleged "rubber" bumper, residue of something on the right headlights. No one in either vehicle. I used the festival's onstage music setup equipment as a public address system to call both vehicle opperators to me at stage and back gate. The Cr-V's driver (owner?) was in instant denial that the high black rubber bumper of her truck could possible have scraped paint or hit, pushed the Corolla that hard. But they did eventually exchange name and phone numbers and I gave the Corolla woman one of my business cards (being a witness—especially important when neither of them were present, neither of them were directly involved—to the parking lot accident). I took a photo of the vehicles in final, resting contact and, i think, one of the bumper damage done.

7:30 pm I left Off Sq. Most of the girls finished an hour earlier. Everything was done. Rented sound system packed first into the car. A-Z Rentals tables, chairs, skirting, coffee perolators piled high on the trailer behind the Grand Cherokee. With tomorrow the Labour Day holiday nothing gets returned until Tuesday. Council's tents down. All the snow fence down and rolled up. One rebar pole left where Alex had driven it into an unseen root. All the signs down. All the power cords rolled up. Some stuff stored in the workspace in the back of the Bejewel storefront. The grounds picked clean. Green garbage barrels all upended. The garbage dumpster rounded high.

Aloe gel soothes my skin. I heard my fridge calling my name. Beer and food await my activation. A sudden body shudder and a 6-pack of sneezes I don't need [Had to stop typing while my head spun]. Chicken tenders, pacific white shrimp, onion, green bell pepper, zucchini await my attention 40-odd feet from here and I must pay attention to them in the kitchen.

T:
loc: off. cap'in's chair
temp: 19 C
sound: Bowie, The Rise and Fall of Ziggy Stardust and the Spiders from Mars
Posted by Joe Blades at 8:48 p.m.

You survived . . . bicycle can be tricky (not really, but I thought it might make you feel better).