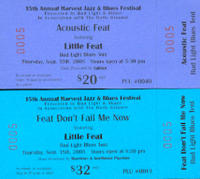 Heard and felt, loved. Something that i never ever imagined happening in any Eastern Canadian town-city where I've lived. So damn unlikely.

The accoustic show was heaven: "Dixie Chicken" jam with "Tennesee Jed" dropped into the middle. "Willin'" with "Long Black Veil" & The Band's "The Load" dropped into the middle. We know they'll also be playing an electric version of "Dixie Chicken" in the show because they said so. If all goes well I can get an interview after the electric show, about 20 min after, with the lead man<151;Paul Barrere. I'm game for that!

Got go keep groving. Have to leave this 'puter and squeeze myself back to the stage front where Mike & Ruth, Liz, Ted, and so many more are just lovin' it, dancing, swaying, singing along . . .

shirt: CHSR 97.9, Exploring the Outer Limits
temp: too hot, but so beautifully hot
loc: bug life tent
sound: Little Feat live in stage, "Down on the Farm"
Posted by Joe Blades at 10:36 p.m.

Gotta love that dixie chicken.acoustic, electric any way you can get it. I nearly cried with Tennesee Jed. So glad they want to come back. Charlene has photos too