because it's not a tradeshow or anything close to full book fair show & sale for publishers to the general public that potentially includes all the readers any author or local, regional or micro publisher could ever dream of reaching . . .

because publisher "exhibitors" are restricted to attempting to sell only backlist, remaindered, dented and otherwise ready-to-rot damaged books . . .

because we're supposed to trust that the bookseller "exhibitors" will be carrying, displaying and actually selling, copies of our frontlist books including books written by our authors that the word on the street has given (with small honourariums) public stage readings . . .

i'm not there. why torture myself? why pretend that this year i might actually sell enough old bookcrap in a 3/4 of a K for the day space with two 8-foot tables w/o sidewalls or signage space, to pay for the expense of getting myself and the bookcrap to halifax? it's never happened before that broken jaw has sold enough to cover the expense of being there (let alone the expenses of making the bookcrap sold). we had a better sales to expense ratio participating in the span-o ottawa small press book fairs (next one happening 15 oct 2005—but that's the weekend before i fly to beograd). we need book events/activities that will earn income not just be a source of expenses. we don't need to be the booksellers' loss-leader. paying to be there yet unable to promote our new books is not a good promotional strategy . . .

i stayed in fredericton. unintentionally had 24-hours without coffee (and only realized that mid morning today while chatting online. that's how out if it i was). second day after 14-days in the faa casemate residency. here is good.

decided to do the bike ride i wanted yesterday but didn't take because of the cross- or downriver-winds. roundabout, via stupidstore, i crossed saint john river and headed upriver for nashwaaksis and an eventual goal of mouth of keswick. some wind but not like yesterday. decided to take a break just past currie's mountain at the picnic table shelter beside a great eastern white pine tree likely twice as old as canada.

intrigued, i copied into my journal the following graffiti, from the fence and table, as close to style as my quick pen allowed: 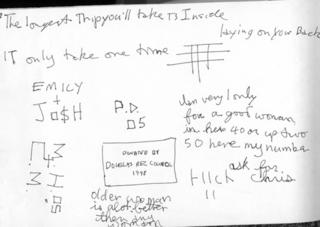 Then I biked to the Mouth and turned around after the Shell station. On the way back I stopped in Douglas, stopped at the home of Wingnut Enterprises. Son Al was manning a trash fire in a 45-gallon barrel. Jane was mulching a bed of Mexican tomatinos. Don was glassblowing in the workshop; making parts for an upcoming exhibit at Handworks in Saint John. He said the 15 of the 19 pieces, all very large, at the Kingsbrae Arms gardens, have sold—most excellent. They have to go there, to St Andrews-by-the-Sea this coming weekend to dismantle and ship most of the pieces. Some will stay in the garden, some will scatter inland to Chicago and other places.

Earlier this month Don and Jane went on a trip to Nova Scotia. Time in the Annapolis Valley then up to Halifax. They even went and visited blacksmith John Little in East Dover. First time in 24-years that they've seen each other. Last time, Becky, the youngest, was two. Said John says he still makes bulk of his income from making local fishermen's anchors; that he's planning, artistically, to move from making the large sculptural pieces he has a reputation for [usually worked with a trip-hammer] to making smaller pieces.

Don's drift is exactly opposite. He wants to move toward making more large pieces. He has two trip-hammers in the workshop: one a Canadian Giant that's still not been set to use in the time since they (the family) came back to New Brunswick after 18-years away.

They'd lived and worked in Muskoka country, Ontario; Palm Springs, CA; Connecticut; etc. but post-9/11 America was too scary, too demanding for a non-American contractor. Especially when being questioned about one of the alleged, not publicly-admitted-proved, on one-of-the-planes possibly working, being employed on the same construction project/job in the land of . . . Plus their son was coming-of-age in a an increasingly agressive nation that was talking of bringing back the army draft. How can one work or live with that? With that threat? With the implications? No, it was clear that it was time to leave the "dream" and return to Canada. Return near where Opus Village had been but not to the Ridge. Nearby.

Ken, the neighbourhood mechanic drops by with his young daughter. Don is the neighbourhood welder. A good pairing. They work together on jobs, when necessary. Ken is driving a new-used Je p [don't know if that's French or a knock-off or just a (suspected) missing letter—good joke all around].

I gotta get me one of them there je ps
It is official. I may have to force myself into a day job for it but I must have a car!