Petunia and the Hillbillies 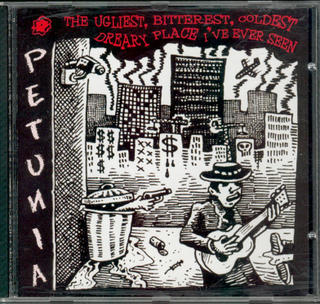 Last Thursady, 25 August 2005, I went to see/hear Petunia and the Hillbilles play at Jester's Court. Petunia solo is great. I've had his self-released CD The Ugliest, Bitterest, Coldest, Dreary Place I've Ever Seen for several years. Great janglying, guitar-based, old country bluegrass and yodelling. Haunting. Can't not listen, his music and vocals just grab your attention and hold it.

This night is different: Petunia with a band backing him. The Hillibillies are local pick-up musicians: Matt Carter on simple drums (used to be punk drummer in Roach when they organized gigs out at the Pyramid warehouse and he was editor-publisher of Nail Bomb zine, is also composer and drummer for the F'ton Society of St. Andrew's Senior Pipe Band), Kyle Cunjak (the freelance paparazzi that was chasing me) on upright bass—I wonder if he'd play a washtub bass, and another musician on steel guitar that I don't know. During the final soundcheck, not seen from where I was sitting, one of the musicians said to someone in the bar that they played "acid bluegrass and punk polkas." Hadn't heard that one before.

It's a rounder, larger sound with the band. Smooths some of the edge off Petunia's guitar. The band is so easy to get into. Fun to watch. Entertaining. The place is hopping full of friends and fans. This is the band to see tonight in Fredericton!

However, the bar service sucks. Ain't no "Big Rock Candy Mountain" here, feels closer to a crowded desert, but, hey, I didn't come here to drink. Because of the ellipse spelling bee early in the morning I decide that I'll stay for only the first set. It ends after midnight. Amber & WhiteFeather & Sophie have finally entered the building. Liz goes to join their table when I leave.

gotta love that acid bluegrass punk polka.
Boyle down was good last nioght at the tappy. My kitchen man is back in town and groovin on the drums.

Going to get the window true,
the cupboards doored
and the drawers handled,
splashboard and trim
on the countertop?

at least the back door, and the window. Probably the backsplash, maybe the doors