Today is my parents' 45th wedding anniversary. They're somewhere on the road in Nova Scotia. It's amazing how the years roll by. One of the early photos that I remember [if I had a copy I'd scan and post it here] is a before marriage picture of Mom with big-curled red hair, smart jacket and plaid pants leaning againt the side of Dad's hot red MG car.

When they married I don't think that an August 6th memorial observation of Hiroshima Day existed or had the significance that it does today on the 60th anniversary of that fateful USA use of atomics in Nippon.

Today there were three weedings [yes, you read "weedings"] at St. Paul's United and at least one at Brunswick Street Baptist around the corner. I felt surrounded by cultish marriage. Both churches face the small city block that houses "my" apartment along with a funeral home, the provincial doctors' medical society, estate and investment planers, a homebased psychiatry practice, a hair and beauty school which interns students at the funeral home, and a few chop-job houses made into apartments for students and single university professors. Diagonally across the block behind me one of these chop houses now sports a condo project sign. I live in an apartment in a former baptist church renovated with an apartment design reminiscent of a doublewide trailer except that there are three floors of four trailers parked on each floor . . .

Call it Wedding Channel but what I 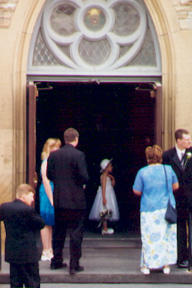 really have is Church TV. From the chair I sit in while I write this in my "office" bedroom I look directly down the centre aisle of St Paul's. [Started in 1882, completed in 1886, in a High Victorian Gothic-Revival style built with quarried New Brunswick limestone, it boasts the tallest church spire in the city (taller than the cathedral), and it has a French-style rose window and iron bells on hand-pull ropes.] When the doors are open and light is shining in through the stained glass windows I can see the organist and the lower part of the pipes of the pipe organ. Whether I want it or not, I get to watch church, wedding and funeral programming. Plus special events: Christian music (local, on the road from the USA, or elsewhere), other concerts, music conservatory testing for the next virtuosos, protests, Beavers, Cubs and Scouts, annual plant sales, yard sales, comedic custodial staff (especially in winter when it comes to cleaning snow off the carpeted steps and ramp), tourists on self-guided walking tours, and much more.

The first wedding today was a small affair: a young couple, the bride in a wasp-waisted strappless white dress with very clean lines, her three bridesmaids in dusty pink. What stood out in the small crowd were the alternate flower girl—a lively sprite who repeatedly climbed atop the railed stone wall fronting the access ramp—and three women [not the alternate bridesmaids] who wore distinct but recognizably icky green dresses or skits. This wedding couple had no getaway car.

The second wedding couple and party were older than the first. This bunch of people have all been out of school and/or university working and living for a few years. There was a pre-ceremony posed photo shoot, with and without sunglasses, of the groom, best man, and his troop—the boys—all large, fit men dressed in black. The wedding photographer was a woman. She flatter-chatted the men while framing and taking pictures. Her assistant, in a black dress, has a large diaphanous turquoise blue scarf thingy thrown about her shoulders. She carried the camera flash. I attempted to take a few pics myself through my street dirt grimed windows and screen. The photographer rushed over to get images of the bridesmaids, in sleveless black dresses, as they climbed down out of a Steroid User Vehicle. One of them protested. I heard her say, "There's no need to take pictures of us here," as I walked out the building's backdoor on my way to Roslyn's for a conversation and a sunny, warm, August Saturafternoon beer in her yard.

When I returned several hours later the 6 pm wedding party, the third wedding, the one that I'd caught in rehersal last evening, was dispersing. The bride and groom already gone.

After I was inside my apart and prepping a chicken tenders and vegie (portobello shroom, onion, zucchini, bell pepper, oriental eggplant, plum tomato, crushed chili garlic sauce, and a splash of beer) stirfry on a bed of rice for supper, I heard the solid wood church doors being closed. Turned sidways to see the last one pulled shut and locked from within. Too much wedding channel for me for one day.

Tomorrow morning, I'll get the regular church service—organist rehersal beforehand, the tolling of the iron bell(s) shortly after 10 am—unless I've gotten away on my bicycle first . . .
Posted by Joe Blades at 8:10 p.m.

Can I pay you to come cook for me? Yummy supper! With the reality craze being what it is these days you should pitch Church TV to Moses Znaimer or something . . . might fly.

hey! you're all over this blobspot like melted ice cream. I could come to your town and cook. What food stuffs are on onhand on the edge of the marsh?

I told you . . . the cupboard is bare. You're the man with all the food. Send shopping list.

can three play this food game?

Preparing good food and eating good food is best done with good company. The more the merrier! To your good health!