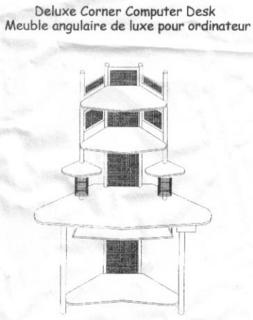 How many hands and hours does it take to assemble a space shuttle computer desk done cheap? This one was bought at Maulmart by Liz for her dining room for a loaner 'puter.

None of the parts are labled (not by part letter or number, not top or front). The identifying drawings are so microscopic that it's like trying to identify the pattern of fingers on holes of the flute player from the nosebleed seats through the wrong end of a pair of opera glasses.

The assembly instructions need more help and intuition than a four of Strongbow cider and a six of Baverian lager from Brazil in the hands of two skilled craftspeople might muster at 8 AM let alone midnight.

A "step" on this episode of the Furniture Assembly reality tv show can, in actuality, be two separate and totally unrelated subassembly routines. The next "step" will have nothing to do with the pieces assembled in the previous step.

Then there's the case of the missing steps. Pieces that cannot go together as illustrated but that must be unassembled and recombined in a different sequence (easier than separating flour and water in a mixing bowl, but close!) 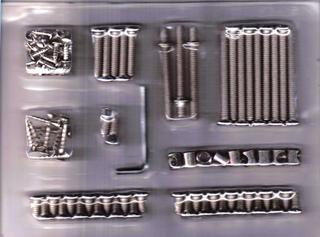 The shiny bits, made from some mystery metal, try to fly everywhere when the cardboard backing or top of their package is peeled away. They want to roll and hide in the floorboards and under everything else in the room.

The instructions could say, "Unpack in an brightly lit, otherwise empty room, an interrogation room for example, or one of those sealed biohazzard/bombsquad units with personnel on the outside operating an anthropod of remote robotic arms. Do not attempt this assembly in your home."

The whole time we're attempting this delicate operation, our distant sensor is monitoring the situation: "Houston, we have a problem..." Communication flying to and from limbo with instructions on what to do should we fail.

Results? Various fragile subassembies are wheeling in deep space orbits around the comm unit of their attention/desire, scattered throughout kitchen and diningroom, behind the loom, in Haggis' futon taco, leaving an illusion of trail to the bathroom as treacherous as a footpath through a minefield.

Sorry, there is no sneek preview or highlights from the next episode of Furniture Assembly. If we had gotten that far, it would be DONE!

This is Broken Joe wishing you good night. Dyslexic fingers over and out.

and he ain't even shittin ya.

I would comment . . . but that would mean I would have to get up off the floor where I've collapsed into a fit of giggles.

I can visual every moment of it.

Obviously, some parts were designed in other dimensions. The fact the it stands without melting is a cross-dimensional miracle. Give yourself a pat on the back.

Biff
Silence says it all.

the damned computer table faeries are on strike. they did not even try to put it together while the boy and I were out!

It works folks the desk is fully functional, even though there are several shiny bits left over, and a mysterious package of little wooden slivers. Possibly the only real would involved in the production of this desk