Cracked Egg Day again, every Tuesday except after a holiday Monday, at Victory Meats. I won't be celebrating 'cause I've still a dozen cracks in the fridge from my purchase of two weeks ago. Cracks are great for just about everything except boiling. Rocket scientist that I am, I did it anyway. Eggs escaping their shells upon immersion in water and then the boiling water throws empty shell and egg bits out of the pot onto the stovetop and adjacent wall. Not a pretty sight!

The air smells like fresh field mushrooms. Been raining since before dawn. Woke me early, it was so heavy. Had to check wide-open windows for its entry.

Crawled onto the 'puter to work 'cause am not going back to sleep at 6 AM. Hi-speed needs to reconnect. Something must have happened during the hours I slept. Need to continue and finish the first round proofreading-markup of Dubravka's Pesme iz kazamata translation of my Casemate Poems book after my phone session with Vlad last night. We've restored the seagulls and eagles, »galeb & orao«; removed the swan, »labud«—much as swans have a place in at least one of my not published Scotland poems and a major role in Norse mythos; asserted that Prince Edward Island is only every a singular island, never pluralDavey board became the Serbian bookbinders' term »lepenke«; I metricised the missed 700-mile march of the 104th; called her on making the Brothers Grimm's pied piper a bagpiper; restored the rhubarb hubbub, »rabarbara gavran«, while sadly losing an inappropriate »raven«—oh, how the trickster pops up so unexpectedly!

Until you've done this some of thing, you just can't imagine how crazy it is to proofread your poems in a language you can't read. But I'm game for it. Next time I'm there, I'll be buying more, larger Serbian-English-Serbian dictionaries. I need resources to help me here to help them there.

Today I also emailed jpegs of the 11 photographs of mine in that book plus a larger version of the good one (edited for focus/clarity) from the second Canada Stand press conference at the 49th Beograd Book Fair in October 2004. 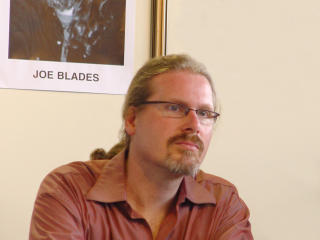 Did you try putting vinegar in the boiling water to cause the egg white to coagulate?