I found myself being more useful yesterday than expected. More than just being an accessory. A friend of . . . An accomplice. Was a stranger, a man in black. But a helpful and useful one.

Pitched in to unwrap foil and wires on bottles of a case of Made in Truro champagne (yes, the champagne was definitely Canadian). Asked to mess with the sound system to get the mics and speakers working for the hi-tek before-wedding music (a Shure 58 lying in front of a CD player's speaker). Family band (Jardines that is, not Underhills) setup. Gordon, the presiding minister, decided that I knew what was going on, that I'd know whether his mic in the arbour would be on, and what the singer (Gail) and guitarist were doing (when, at that point I didn't even know their names, but I certainly can recognize a torch singer when I sees one, so I directed him across the yard in their direction. I snagged pics when I could. Plugged in fairy lights in the trees (with the wired white doves on birch tree branches) when needed. Met people. Got the certificate from the groom (was on his Harley Hauler's dashboard) and put it inside the book for signing after the ceremony, collapsed chairs afterwards . . . Stuff like that.

Morning after, and we've been driven into the real Newcastle inside Miramichi City and up the hill to Station Street (that wasn't really a night below . . . ) Then, I'm sitting in the VIA station on Station Street waitin' fer a train. 10:10 is the posted departure time for the eastbound Ocean, No 14. Kellie and I heading to Monkeyton for the poultry reading ("I'm not a pheasant plucker . . .") at Café Felix. 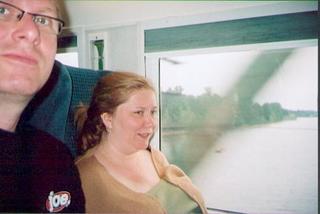 I survived a Barnettville Road wedding. A road I'd been told no one should enter withour a means out (and a rental car would have been good for that!) A road black with the residue of many tire fires—Halloween, New Year's Eve, whenever—punctuated with a snakepit of long, black, peel 'n' burn rubber from how many tires? How many trucks, hogs, ATVs, cars? Over the years I've attended more funerals than wedding.

Getting there was the first step. With his case of nerves and a stick of Rolaids in pocket, a near-hyperventilating Claude behind the wheel, talking fine but saying he's not wanting to see some of the family. No first big step was crossing the Westmorland Street Bridge, then Kilarney Road passed the lake, Nashwaak Village and out Hwy 8 for Boiestown, bald eagle just metres above the car in Nelson Hollow, Doaktown, a pit stop at Bruce the Moose for an 8-pack of red . . .

Electronic horses on the brain . . . board games . . . waiting for coffee and sandwiches to roll down the aisle . . . could just jump one of the stewards walking by with a new pot. Should get some sometime before Montob . . . on this slow canter along the trail, Dale Evans style. Just discovered that I'm being a rebel on the train. I’ve stuff, my denim jacket, hanging out of the overhead bin. Cool, but I’ve left the net open. That's a "No, no." I could be fallen upon. Felled by my coat, and if it was any more humid than it already is I could drown in my own jacket.

Why doesn't this so-greatly-improved-over-the-old-ones VIA train has AC outlets for people/passengers to plus in CD players, cell phones and laptops? If Orleans Express and some newer Acadian Coach Line busses can have outlets besides the seats, surely the train could. Just consider the long hours on board. It would be so good—and it could be a service improvement. It would save thousands of batteries in the course of a year.

Every time we get up to what seems a good rolling speed it's time for another stop. We're coming up on Rogersville . . . Acadien town with monastery, nunnery, rookery . . . popular for contemplative retreats (including organized creativity or writing retreats). One of those: monastery, nunnery, rookery. Pick one, none, all of the above. I spelled monastery wrong and the built-in spell check suggested “molester” as the alternant spelling. Damn, this machine is good. As if it actually knows or has a heart . . .

I don't even know how many stops there are before Moncton. Have I ever been on the Ocean before? Thinking . . . must have been on it for the Grade 9 class trip to Québec City 'cause we took the ferry from Lévis across the St Lawrence River. I know that I used to take the Atlantic train that passed from McAddam (on the New Brunswick side of the St Croix River border with the USA) through Vanceboro, Maine and Sherbrooke, Quebec en route to Montreal (but that's another story)