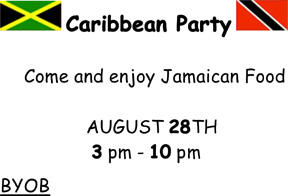 or contribute to the collection fund for the small keg (7.75 gal) of Picaroon's Dooryard Ale. Simple. A "lucky pot" party too, but Mary Ann had omitted or forgotten to tell me that aspect. I woulda coulda cooked and brought something worthy.

Afternoon outdoors/garden/dooryard party on the occasion of three people with birthdays in the span of three days. Two us us, Tracy (in Toronto), and me (in Montreal) have been to parties with people born on the same day & same year. Donovan hasn't yet had that experience.

Tracy came here from Toronto. Plays flute. Has played with Kwame & Doherty in Ujamaa (the Harvest J&B reunion?) Has flute there—just in case. Has almost invisible eyelashes. Djembe with Eastside Board stickers under the maple tree. Keyboard in the house. Hatian rum, too. Dr. D is a football fanatic. I've met him before at Windsor Castle, the Grad House bar—sometimes simultaneously watching different games on different stations. We couldn't do Ice House poetry in the same room. It was all football with him and fellow fans in the room. Donovan mans the barbe—roasting cobs of corn. The leaves blacken, even slow burn, but the corn, with a small chunk of fresh coconut, tastes great. He also cooked the jerk turkey which makes for a very tasty bird.

Inside are a curried prawn dish on the stove, curried lentils, chick peas, a thai curry (my guess was ckn), ham, several rices, chutney, flat breads, banana bread (by Tracy), achee and codfish turnovers (salt cod and akee is the national dish of Jamaica), a brittle, tamarind juice, ice tea, wine. Fresh fruit and flower blosson topped cheesecake with one big candle in the centre that we three blow out together.

Downloaded Lucky Dube in the CD player—African reggae, incl. cover of Peter Tosh's "Mama Africa". They expect the police sometime here after 9 pm, time they came last year, to shut the music down. After the orange sunset over the StuporStore horizon beyond the ivyed fence I feel so full, so sated, that it could easily be tomorrow. When I find a clock inside I'm surprised to read that it's only shortly after 9 pm. Early for a birtday party night, but decide to leave anyway. It's been a great few hours. A great little party.

Now that's a feast. I should have sent a courier to pick up left-overs for me. Sounds delicious. Happy Birthday!