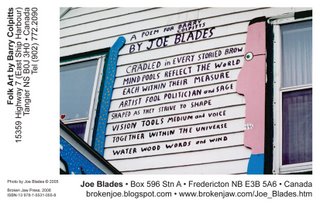 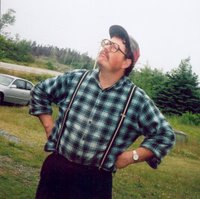 Barry Colpits is a folk artist with a wicked sense of humour. His specialty is wood carvings that he paints in bright colours: animals and people, Jesus and devils, Mounties. Even his truck is painted and the box ringed with fish. Atop one of the bookscases in my studio, I have a crow made by him with a pink tongue and bright blue eyes with eyelashes.

Early in 2005, I was asked if I could write a short poem that he would paint somewhere on the outside of his house. I thought about it for a while . . . Started writing and rewriting and eventually, last May, faxed a tight little eight-line poem to my parents. They drove it over to him. He painted it on the back of the house in June. Coming from his studio-shop you can't miss seeing the poem up on the second storey wall. It gets a great many comments from visitors. Everything at his place elicits response.

Sometime later last summer I made it to Nova Scotia and was able to visit Barry. That's when I took the photo (above) of his painting of my poem. I've finally gotten around to having printed a postcard of the poem-photo for both of us. A box of them were waiting outside my door this morning (along with a few copies of the next issue of ellipse magazine). Nice delivery. 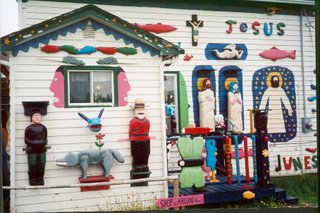 If you're ever driving Highway 7, the Marine Drive, on the Eastern Shore of Nova Scotia, keep your eyes peeled for his house in East Ship Harbour. You can't miss it. Be sure to drop in. Look around. Bring a piece of Barry's humour into your home. 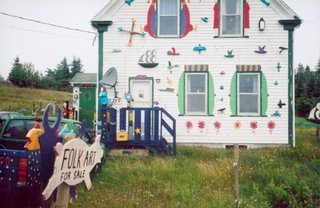