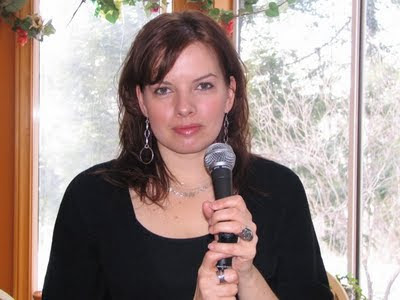 Shut Your Mouth and Open Your Mind: The Rise & Reckless Fall of Lenny Bruce, Chapters 4–5.

Looks like I’ll be hopping the big pond (again) in a few weeks . . . with a little travel help from UNB.

Going to Sofia, Bulgaria to present a paper and give a poetry reading at “Managing Diversity and Social Cohesion: the Canadian Experience”, the Central European Association for Canadian Studies’ 5th Triennial International Conference.

A first: I haven’t been to Bulgaria before though I know one of the organizers and several presenters from a 2005 conference in Niš where I also partied with a Bulgarian theatre troupe. My Balkan adventures continue . . . 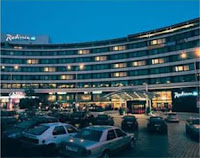 Don’t know how the organizers have done it but conference attendees are being accommodated three nights at the 5-star Radisson Blu Hotel in downtown Sofia, opposite the National Assembly, for less than the hotel’s posted one-night rate. 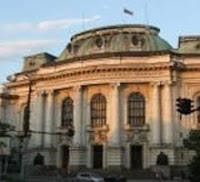 Most of the conference presentations and activities are to happen at Sofia University « St Kliment Ohridski » . . . up to four simultaneous panels.

thought of going for
a bike ride but lite rain

has started so i guess
i’ll stay in; read kisis-

must in fallen leaves
and my supper’s tongue 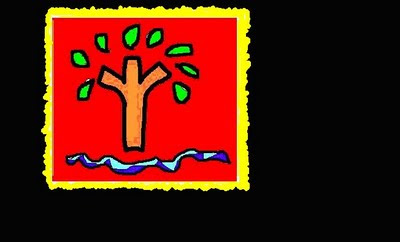 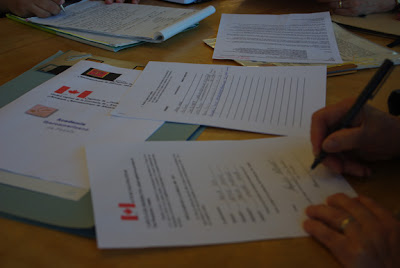 Signing papers and recording minutes of the meeting. 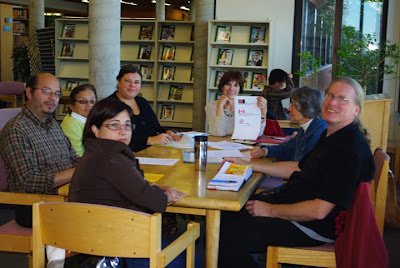 Was awarded a graduate assistantship with a mix of GTA and GRA work. My GTA work to be in/for the Mi'Kmaq Maliseet Institute within the UNB Faculty of Education—the only centre for Aboriginal education studies in the Atlantic region—editing undergrad Aboriginal student-written course units and lesson plans for use in Aborigial classrooms.

Zap! I was Unionized

Big surprise! Learned during Grad Orientation Week that as a Teaching and/or Research Assistant at the University of New Brunswick I am automatically a member of the Union of Graduate Student Workers, University of New Brunswick Fredericton and Saint John, Public Service Alliance of Canada Local 60550. Union card to come. Collective bargaining has been underway since certification. The 2009 Annual General Meeting is scheduled for 5–7 PM, Wednesday, 7 October 2009 in the Alumni Memorial Building, UNB–Fredericton.

24 09 2009 NOTE: Anonymous wrote that I am automatically in the bargaining unit [meaning, Graduate Student Workers] and that I'd still have to sign up to join the union [Union of Graduate Student Workers]. Don't know whose nits they think they're picking but they're not mine [I did sign up; I am awaiting my card, as stated above] Don't you just love anonymous!?! 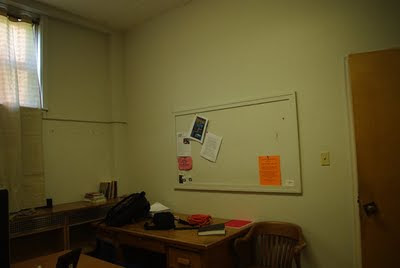 Base camp may be at the foot of the hill but I've been given a desk in an office above the monument's shadow in the valley. In theory I could create my own shadow but not from within the office more akin to groundhog burrow. Used to be a janitor's (now called by the euphemism "Facilities Management") room off a stairwell with empty key box and three fire extinguishers, yes, three. Has an overhead, south-facing, curtained window that can't easily be seen out of. Share it with two other grad students: one is currently teaching full-time @ UPEI (but still "has" a desk here?); the other uses the office as the video-edit suite for his research work. I need to use extension cords to get electricity to my desk. 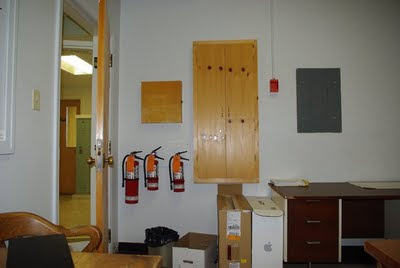 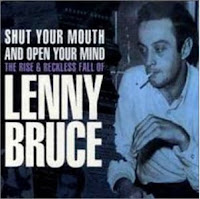 To celebrate the International Day of Peace

To celebrate the International Day of Peace (September 21st, established in 1981 by resolution number 36/67 of the General Assembly of the United Nations), the Fredericton Chapter of the International Ibero-American Academy of Poetry will offer a poetry recital at the Fredericton Public Library, on Saturday, September 26, 2009, from 3pm to 4:30pm. During the recital a minute of silence will be observed. The general public is cordially invited to attend the recital, and to contribute by bringing a poem, in any language, to be read during this celebration for harmony in the world and in families.

I hope you will be able to join us! / ¡Esperamos que puedan unirse a nosotros! / On espere que vous pourrez vous joindre a nous!

so there was i

but am i interested
he asks & i said yes but . . .
he runs off to a car
returns with ticket in hand

Found today, 15 Sept 2009, in late morning in Rm 145 Marshall d'Avary Hall, UNB–Fredericton. Three photoprints (from jpeg files) found under a stack of education magazines/journals dating back to the mid '80s that I took to the Graduate Student Lounge mini-library. 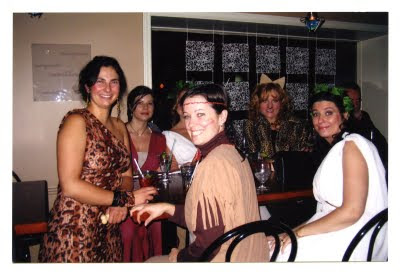 This photo for Christina. Halloween party some year ... Don't know Christina, but do know Monica in the foreground. 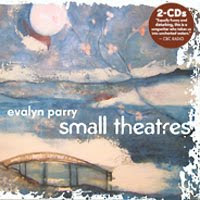 Joe Blades to Commit Another 50 Random Acts of Poetry 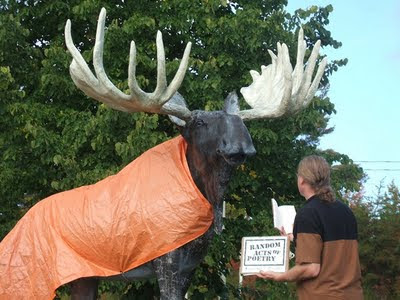 31 POETS TO COMMIT ‘RANDOM ACTS OF POETRY’ ACROSS CANADA

During the week, 31 acclaimed poets across Canada, from Victoria to Newfoundland, will commit Random Acts of Poetry in their cities and adjacent small towns. On buses and subways, in donut shops and cafes, police stations, grocery stores, shelters, curling rinks, on city streets and country lanes, poets will read poems to strangers and give them their books. Poets will also read their poems in ESL and Adult Literacy classes.

In Fredericton, NB, Joe Blades will paticipate for the third year. On the editorial board of revue ellipse mag, he is Vice President–Membership Chair of the League of Canadian Poets, producer–host of the Ashes, Paper & Beans community radio program, founding publisher of 25-year-old Broken Jaw Press, and a new grad student at the University of New Brunswick. The author of five published poetry books, including River Suite and from the book that doesn’t close, he has several books in the works, including Casemate Poems (Collected). Two of his books have been translated and published in Serbian editions.

Patrick Lane, one of Canada’s premier poets, says of Random Acts of Poetry, “There are no accidents. Nothing is random. A poem sits in a poet’s pocket and jumps out when you least expect it. It can nestle in a mechanic’s ear, a politician’s hand, a waitress’s bright eye, somewhere, anywhere. You look up from work and there’s a poem. It reads itself to you. It asks you to take a break. It says: Right here. Right now.”

“Poetry,” says Wendy Morton, founder of Random Acts of Poetry, “is the shortest distance between two hearts. I have read poems to hundreds of people, many of whom hadn’t heard a poem in thirty years, and watched their eyes fill up with tears. Some burst into laughter or laid a hand on my shoulder, hugged me, took my hand. Poetry can connect us with each other as humans as no other art form I know. Poetry is a gift that we can create from whatever life has in store for us.” 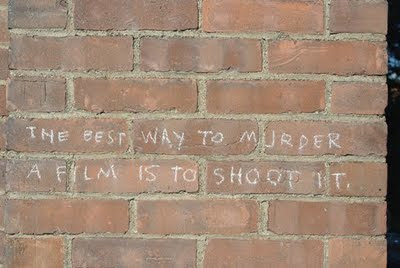 Seen B4 the opening at The Gallery last week, this disgruntled message is still chalked on the wall of NBCCD.
Posted by Joe Blades at 11:08 p.m. 1 comment: 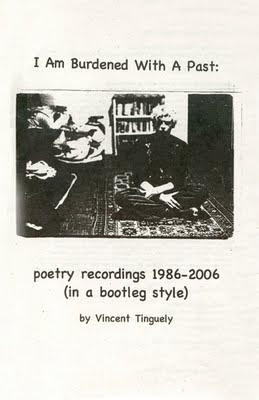 Montreal, Vincent Tinguely: "Burdened With a Past", "Little Thrill", "Regrets", "The Idea of Prison", "The Perfect Watchword", "No Problemo", Impure Launch promo", "Do You Have Something a Little Less Totalitarian?", "Scarlett", & "Collateral Damage"