banana or
chocolate chip cookie(s)
or both?

abso no peanuts
or peanut butter
on set tomorrow

support our tropes
Posted by Joe Blades at 1:45 a.m. No comments:

head awake b4 body
in pre-dawn fog
ice drizzle
whatever

hence the ongoing miracle
of stones with holes

no pie interviews
spooky pieces
music to songs
new canned goods
lc every capital or upper
for others
Posted by Joe Blades at 6:17 p.m. 1 comment:

+
"Part of a poem by Alden Nowlan called Ypres: 1915" (song) by NQ Arbuckle.
"Window Seat", "Habitat", and "My Mountain" by Aural Heather.
"Whisper" by Andrea Thompson.
"The Density of Fire" by Sharon Singer & Bob Mover.
Posted by Joe Blades at 3:13 p.m. No comments:

visit doesn’t happen
stuck in forest hill
or somewhere beyond

poet’s small paper day
filed an expense claim
hung some art too
asked for time off
Posted by Joe Blades at 1:29 p.m. No comments:

wild sound: zipper
smoother down
than up . . . can be
reversed in post

everything ends up
in the beginning

boot is the money
swing through frame
sells it

no pause
no reaction to the hit

flip taps (slit
when used as
a one-piece box)

enough to get home and crack open a dark strong
lager while emptying loaded pockets and eating
before a few hours of daytime sleep before . . .

or grips in snow erecting lights
flags and bounce boards for later . . .
what use a dartboard without darts?

or next predawn monday the closing
that’s a wrap! but hours of tonight still
to film after driving the picture car
Posted by Joe Blades at 11:26 a.m. No comments:

in another childhood     flipper
a lively intelligent bottlenose
dolphin living with     assisting
and protecting a park warden
widowed dad and his two sons
was played by a string of females
in drag who had girlfriends and
who even fathered an baby
Posted by Joe Blades at 8:52 a.m. No comments:

leafless tree branches hold
their breath as snowflakes
almost land on their bark
cedar trees in the garden
confident     almost pompous
as this year’s young fir tips
not harvested by wreathmakers
eagerly await holding first snow
with their tightly wrapped leaves
Posted by Joe Blades at 1:32 p.m. No comments:

crane left at sunset
Posted by Joe Blades at 6:08 p.m. No comments:

walking or driving backwards does
not undo the wish i hadn’t done that
water and wind erase many footprints
but what of human’s destructive hands
Posted by Joe Blades at 6:49 a.m. No comments:

the holes are not black     just
absent of paper—no wonder
with the excessive rainfall
a nursing students’ pub crawl
and on every street a strew
of tilted letterboxes     mail
drops     and bags of autumn
tree leaves gathered     plus
a bonus on regent street:
a toppled freezer of bagged ice

story images swirling inside
he composed while travelling
as all of us travel our lives
in the ever of now . . . now!

even if shrubs in the park across
from city hall still spelt out tito
tonight he would cross the border
for the last known time . . .
heading for budapest and flights
west though frankfurt et montéal
to a known     safer life in fredericton

the poems     the poems are calling
o poet boy     what will ye do?
méxico might be good for winter
italy or a greek island     too
this town is difficult in snow

fog in the lowlands below ridges
of leaf-bare hardwoods and turbines
he passes a transport of p.e.i. hogs
quebéc abbitore bound     like him
travelling to and in lower canada
a hunting hawk hovers close over
grass between twinned highway
Posted by Joe Blades at 12:39 a.m. No comments: 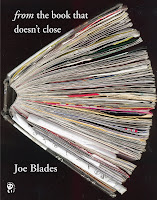 after stopping a man from driving wrong
way up a one way off-ramp     you crossed
the street     entered the loading bay
and tried climbing deceptively broken stairs
so led down     some end abruptly
at a wall or turn into stacked boxes
and hollow wall-less crates
you trip-stumble     fell onto a door
and into a room filled with fabric
bolts and women at sewing machines
as another waring roller skates
fell against you     her armful of bolts
spilling around you as you fell and she
landed on top “what are you going to do now?”
Posted by Joe Blades at 1:11 p.m. No comments:

phat rain like in the tropics . . .
should be crouched under jungle
leave large as umbrellas or
naked not caring worrying about
getting wet or chilled cold
where rain like sun simply is
but i’ll not be out there in this
november rain until necessity
pushes this crap into the ground
feeding my poor pitiful poetry

this morning     black coffee and an apple
soon     the literacy fair and luncheon
at old government house with me cleaned
up in suit coat and black dress shirt
pesto chicken salad sandwiches and pink
lemonade     20th anniversary cake too—
fog between trees and over river lifts
Posted by Joe Blades at 4:19 p.m. No comments:

lamb roast in the oven with fresh
rosemary and rock salt—a small tribute
to whole lambs on rotisserie skewers
in those travelled balkan mountains
am i     or was i     naïve? fuck! i’d love
some gorky list     roast goat or jelen pivo
but i’ve been back two years in fredchicken
—no risk here of becoming another zet

"Into the Deep" by Sharon Singer & Bob Mover.

the gopher in the bathroom floor
stuck its tongue out at me and
it didn’t understand my peeing
into a basin of water cold—
deep underground river brought
up here for this purpose? stupid

air damp enough to cut through
flesh to our aching old bones
—only a week until the war
ends (again) and the red poppies
with green then black centres
are returned to the ground
at the foot of so many memorials
from ocean to ocean to ocean
Posted by Joe Blades at 6:00 p.m. No comments:

a month of daily poems

I don’t really need a challenge so much as routine to put time into writing poems routinely when this so, so much other bust in my life between the Art Bank, publishing, freelance work, writing and art, and filmmaking projects . . . But I received a F’book message from Robert Lee Brewer about a PAD (poem-a-day) Challenge: “to try writing a poem a day in November with the view of trying to have the makings of a chapbook heading into December” while the NaNoWriMo writers are aiming for 50,000 word novel manuscripts by month’s end. His Poetic Asides blog covers poetry from the perspective of a published poet and long-time editor of writing market guides: Robert Lee Brewer. Check it out at Poetic Asides.

This could be a more reasonable challenge where I'll on the road a fair bit this month and my novel writing currently is much slower than a 50K-word month but I have written several book length poetry manuscripts in two-week, part-time, public, artist residencies and lesser amounts of poems in shorter periods of time (such as for the 24 Hour Zine Thing).

real thanksgiving on the spot
for the food and for every sunny day
—especially warm ones—air crisp
as biting through an apple’s skin
anytime now night ice will stay
frozen all day and the rain will turn
colder until the showers are snow
covering gardens roads homes and trees
Posted by Joe Blades at 2:04 p.m. No comments: