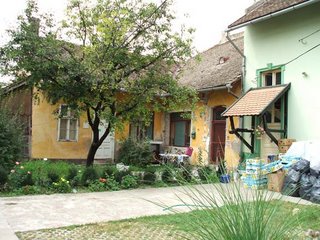 The house I'm living in used to be the servant quarters attached to a far larger mansion when it was build 150 or so years ago (so this brick and mortar Austro-Hungarian era mansion, with its freemason symbol still above the street entrance to the courtyard, with its large cherry trees, is as old as the City of Fredericton).

Earlier this week flyers like the one above appeared in Mojo Club and elsewhere. A few days later posters appeared in windows and on walls in the centar of town. [One will become the cover of a new journal I've started today.]

This weekend, along with an annual hot air balloon festival, Senta will be celebrating its 500th anniversary. There's at least one new statue (still under wraps) erected overlooking the river Tisa. There will be other activities that I think I might want to see. I've heard, having reached this half-millenium mark, that Senta will now be declared a "royal city". Whose "royal" I don't know, and am not sure I want to know . . . Austrian, Yugoslav in exile, or?

Weirdly (and annoying for some) all of the posters and stuff seen is only in Hungarian (not Austrian German), not in Serbian.

The celebration happens this weekend because of another historic occurrence here . . .

The Battle of Zenta or Battle of Senta, fought on September 11, 1697 just south of modern Serbian town of Senta (German: Zenta), on the east side of Tisa (Tisza), was a major engagement in the Great Turkish War (1683–1699) and one of most decisive defeats in Turkish history.

From Wikipedia, the free encyclopedia

So, at least here in Senta-Zenta, 11 September has had a positive memory for many Austro-Hungarian descent locals for a great many years. There's been a monument for this battle and a museum that covers it and more (which I've yet to visit).