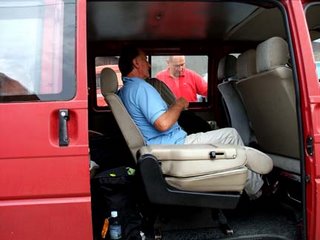 Zelijko, in the red shirt, is the Filozofski Faculty's driver who collected me outside the Novi Sad bus station. One of the professors from Beograd is seen here in the van, a Volkswagon Transporter. Eventually, Zelijo has rounded up seven of us in Beograd and Novi Sad for this week's run to Pale. 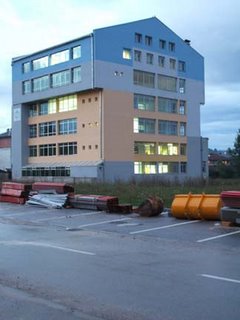 This is a dusk photo of the Filozofski fakultet building opened for or during the past university year (months before I visited in April). To its right [not pictured] is a similiarly constructed law faculty building in browns. These two buildings constitute the whole of the campus of the Univerzitet u Istocnom Sarajevu (University of East Sarajevo). I believe that there still exists some sort of affiliation between this university-campus and the now mostly-Muslim populated University of Sarajevo (but I'm really not clear about that). Elsewhere in Pale, I've been told, are student accomodation buildings. The professor apartment that I was in is one of several located on the nearest corner of the highest full floor of the building. 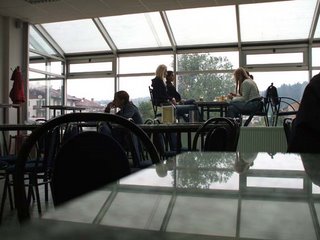 Morning in the ground floor caffe in Filozofski fakultet building with several students in the raised seating by the windows. 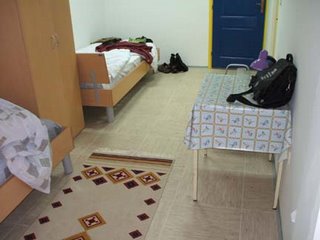 Inside the clean (but it's so very new, that even in April these rooms were not available) but very basic apartment. No television. No fridge. No stove. Just two single beds with a wardrobe between them. A small table with student study lamp, two chairs, and two glasses. One "HOTEL" towel, folded, atop each bed's pillow. No toiletries. No radio or alarm clock. 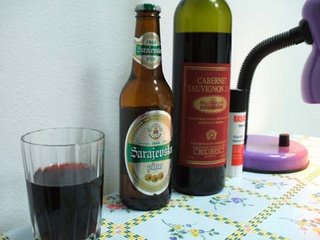 An arrangement of bottles, glue stick, and lamp on the mall table. The red wine is from Krušvac, Serbia (where I read in April). The beer, Sarajevsko, is a hops-flavoured premium lager that's existed since 1864. 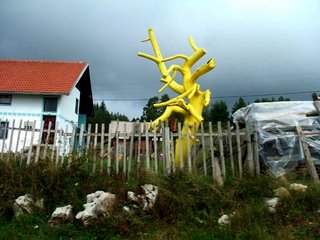 One from the road: Love this painted yellow tree trunk in a yard beside the M19 in the mountains. I think that I would like to collect the story of this tree . . . but that's not ever going to happen with me a mere passenger in a van full of university- or home-bound professors.

Just catching up. So busy here. LOVE the yellow tree. how many opportunities for stories do we pass up each life time?