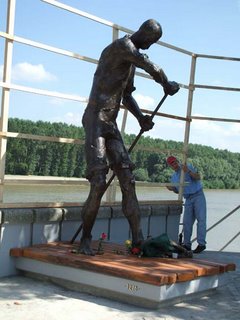 Finally, Saturday, the statue is revealed! Definitely believe it's a riverman but need to get some Hungarian text translated to better understand what I've seeing . . . 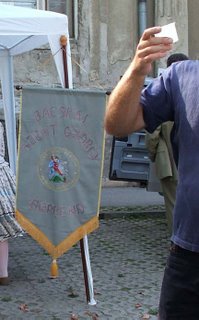 On the the riverside road, just up from the statue, there were men in big capes and girls in some period's clothing. All with carrying carafs of wine and glases or short plastic cups. Their anchor was a special tent with this "Bacskai Szent György Borrend" banner and small kegs or barrels on the table. The men were posing for pictures with or for people sitted at the nighttime concert's beer tent tables. Everyone had wine. Even I was given a glass to be filled gratis.

Days later, I've uncovered that this was a wine tasting [new wines likely, but I don't know for sure] by one of a network of wine brotherhoods or societies across Europe. Perhaps the wines were locally grown grapes pressed? 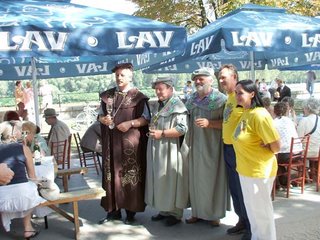 Here's a pic taken while three of the brotherhood were posed with two of the yellow T-shirt-wearing Friends of Senta Committee, for a photo taken by a man to my left. the cape-robes are elaborate—especially the embroidered grapes and vines. I've no idea what is on the medalions, but would suspect it's more of this wine-tasters association. Buddy in brown is likely the head.