Confusion seems to abound on where I am these days. Few family or friends seem to be able to visualize the Balkans well enough to have a clear picture. My grandmother thinks Beirut or Belfast when I've mentoned Belgrade or Beograd. My flying in and out of Budapest, Hungary has only confused her more . . .

Not even certain that they will help, today I am posting three maps to help locate me. If one can visualize or find an older map or globe that shows the former federation of Yugoslavia—on the eastern shore of the Adriatic Sea, in the Mediterranean Sea, east of Italy, south of Hungary, north of Greece—it would be the basis for the simplified map below. 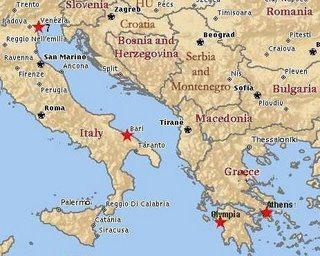 Serbia now stands alone from its recent economic & political association with Montegegro (Crna Gora) since Montenegrans voted in a May 2006 referendum to go it alone en route to joining the EU. Serbia is now a landlocked country. Its surface area of 88,412 km sq is 1/113th that of Canada. On the simplified road map below I have added both Senta, Serbia in the north (where I am living) and Pale, Republika Srpska (where I am teaching) to the west of Serbia in Bosnia and Herzegovina (BiH). The area within the thicker blue line is shown in considerable detail on the third map. 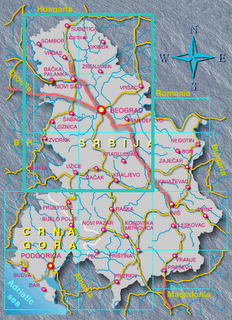 Click on the map below to enlarge it to optimum size. Senta (west of Subotica) and Pale (west of Sarajevo) are underlined in pink. A line of yellow dots has been placed on the road route of the bus from Senta to Novi Sad and then of the van to Pale. Most times that van travels from Beograd (so I'll be busing there first). We always cross the Serbian border at Loznica and, if coming from, or going to Beograd, we take the Beograd-Zagreb tollroad between the Ruma exit and the Beograd airport. 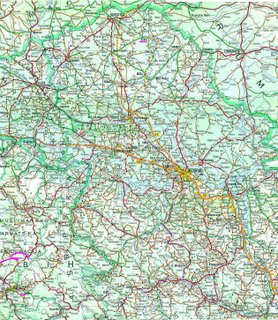 Senta sits at a low elevation of 80m (almost exactly the elevation of the Swanton Drive house in Dartmouth). Pale sits at 900m but some of the mountain passes crossed to get there are as high as 1500m. [By comparison, Banff, Alberta is 1483m above sea level but the mountains climb another 1500m above the town.]

It's a good six hour drive plus break(s) from Beograd or Novi Sad to Pale: cobblestone main street through some towns, farm tractors, horse wagons; narrow, twisted roads over the hills and mountains with no slow vehicle lanes, and alongside the reka Dria with it's numerous cliffs, tunnels, and the ruins of an old Turkish Ottoman fort. Winter snows (have heard that Pale gets 3-4 metres of the white stuff) and weather will make for a longer drive.

got the little package today. So nice to open the mail box and find happy things
liz

happy things should always be welcome.

This is "where's waldo" broken Joe style. thanks for the "lesson"