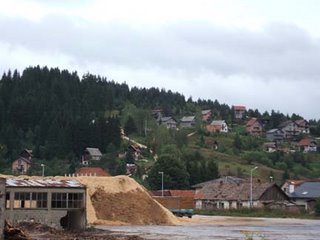 A view from near the university buildings in Pale of a small section of the hills-mountains that surround this town. As the town is seeing new apartment and retail buildings pop up in fields and where other buildings existed, I suspect that the sawmill's days in the centar of Pale are numbered. Pale is located in the autonomous Republika Srpska adjacent the larger (but not "large") Federation of Bosna i Hercegovina within the more complex nation state of Bosnia and Herzegovina. How the government works, I don't rightly know. Some or all of it is in the midst of an election campaign with a vote scheduled for sometime in Oktobar.

After registering with the police (I was accompanied there by the English Department secretary, Vera, and the Filozofski Fakultet's lawyer who had to sign a legal form taking responsibilty for me) for a short-term permit, and then going through crazy office runaround in an Italian-build medical clinic (including a meeting with a cigarette-smoking doctor) I've applied to the Ministry of Labour (Republika Srpska or BiH I don't know) for a work licence to teach at the university. 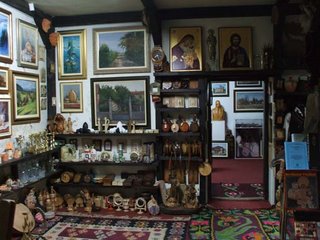 A part of the view inside a store in Pale that seems to specialize in Orthodox ikons, traditional stuff, and local landscape paintings. Haven't yet been inside but I do want a closer look at things seen here. 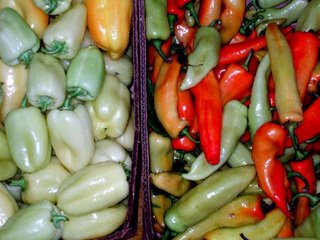 Rain-wet fresh paprikas outside a store. They have these pale white-yellow peppers (that turn orange then red) rather than green bell peppers like we have in North America. Hot paprikas / peppers on the right. 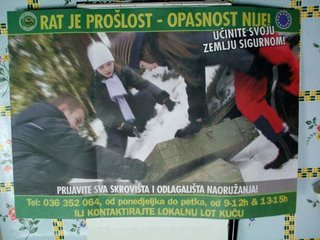 But all might not be well. I found copies of this poster in Pale. It's a publication of the Salamander Task Force of EUFOR (the 1,500 peacekeepers stationed in BiH from France, Italy, Germany, Spain, Morocco and Albany). Believe it's mostly Italian forces based in Republika Srpska. Know that here are still issues of weapon caches, ammunition, and various types of nasty landmines and similar pressure-triggered devices. Would make for a dangerous form of extreme skiing to get caught by one of them on the wrong slope. 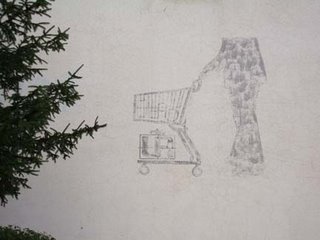 This appears to be a warning of another hazzard in Pale. Seems to me, that this painted wall is a sign or cautional tale of what happens when one goes too deep in one's dependence on shopping and consumerism . . .