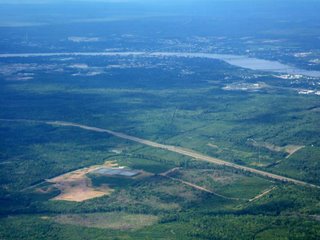 Fredericton, New Brunswick from the air just after takeoff. 23 Aug 2006. My last view of the city with my own eyes (though I have found a City of Fredericton live webcam, refreshing itself every 60 seconds, on the Weather Network site which shows riverside trail and part of the too-grandly named Port of Fredericton with the "SS Bradside" tied-up in clear view. 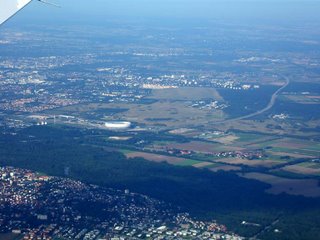 Munich, with some Olympic facilities visible, shortly after takeoff in a Canadair-built jet as we're about to turn and head over of the Alps for Budapest. 24 Aug 2006. 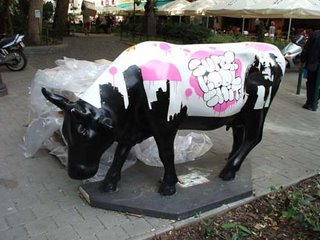 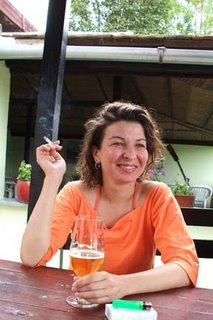 Happy Jelena on Saturday afternoon in the Csarda caffe-bar with friends on the bank of the Tisa just upriver from Senta. 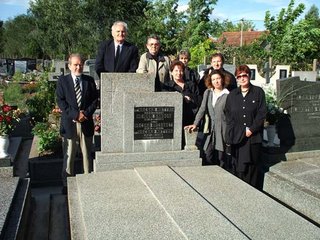 Not the way I'd imagined spending one of my birthdays but, going with the flow, I'd spent the day of, and the evening before, with members of Jelena's extended family gathered in Senta from Beograd, Sarajevo, Banja Luka, and elsewhere for the funeral for Vela Neider. Vela was Jelena's uncle, and Eva's brother. Jelen's parents, Eva and David, came to stay here at her place, so family and friends visited here. I was party to it all, even while Jelena was at work on Tuesday. It involved much brandy, pivo, vino, food, and conversation mostly in Serbia with some French and a very little German, Russian and English. Afterwards, I was asked to take a Neider family photo at their grandparents' gravestone.