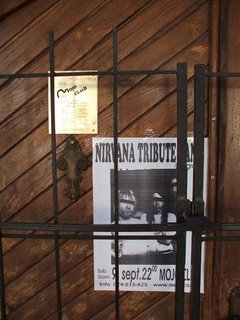 Before 11 AM, it's closed evry day. Not just locked but gated with a welded iron grill. When open, it's posted hours are until 2 AM (except Sunday & Monday till midnight). Tomorrow night, some of Zenta will be celebrating its 500 years of existence while others will be gathering in Mojo to hear and feel a Nirvana tribute band from Beograd.

Inside is all dark wood festooned with stuff from their own past, and acquired from other bars, concerts and their patrons [a Picaroons beer coaster is going there as soon as I remember to take one]. There a pool table that gets covered on band/DJ nights for tabletop dancing. There's a British-style dartboard from a German bar that's never been used in Mojo else there'd be dart holes in other stuff on the wall.

It's a two-story pub with an open balcony all around the top floor that's most often used as a dining area (pizza, spaggetti, lepinje—a type of sandwich, chicken wings, etc.). There's a few skylights in the sloped open-beam ceiling. Turkish toilets only—a long way from the invention of Thomas Crapper in England and his successors. Takeout available for delivery on the back of a Tomas bike. 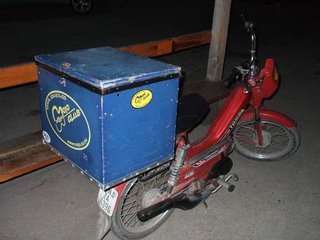 This place is truly a local, a great one at that. Everyone from grandparents to grandchildern and dogs in one place. Kiara's vet showed up there last night not an hour after he'd administered the three-month needle. The plumber who worked on the dying clothes washer (inherited with house) hangs there. As does the maker of the cold-wrought iron shelving; the mason who tiled the bathroom; the friend who came with his lawnmover before the funeral party . . . it's almost as if you could say, "If they don't go to Mojo, they're not the right person to do something for or with me." 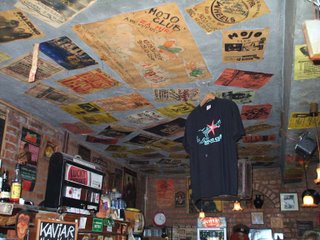 Here's a view of some of the ceiling over the bar downstairs with the latest version of the club's t-shirt hanging above all. I still haven't made it to a live entertainment night (not so easy when one's partner has a 5-year old). Summer afternoons and night are great for sitting on the long bench at the converted sewing machine tables (mostly Singer bases, one Durkopp) on its narrow sidestreet. Plenty of converation, friendly people, cheap pivo (beer)—60 dinar (about $1 Canadian) for a 0.5 litre bottle of Jelen or Lav.

Jelena and I did hear some of the recent Reggae Night. It was all CD music (not live like Wednesday nights at The Taproom with Dub Antenna on stage). 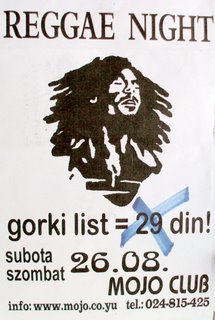 Last weekend was busy with DJ Fraser (from Hungary) playing till 5 AM Saturday and that night the band Plug In played with their cover of Red Hot Chili Peppers, Radiohead and more . . . Both nights were great, we've heard. Once Matthew's vinyl arrives from Portland, Oregon I suspect that mrtigerstripes will DJ some nights @ Mojo.