One week later, the Harvest Jazz & Blues Fest resurfaced last night for a special concert for the volunteers [of course we still had to buy tickes, and once there were encouraged to buy drinks, t-shirts and CDs]. Some have the $ for than, not just time to give.

The show was great: essentially a Colin James "unplugged" without the band of drums, keys, bass players on stage: He was accompanied by Craig Northey, of Odds (or, The Odds) on guitars. Craig soloed several songs including "Not a Lot Going' On" of Corner Gas theme song recognition, co-written with the Gin Blossom's Jesse Valenzuela. 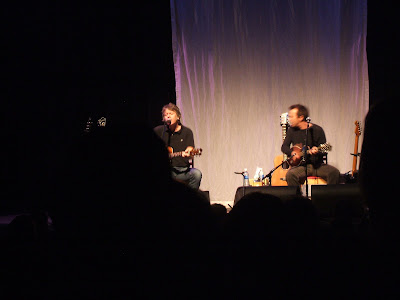 Colin James even played mandolin. During the night he said that he felt a little off, and was doing neo-citron for stuffiness or a head cold, but for almost everything he was on. Many original tunes with some great covers incling "Into the Mystic". Some great solo pickin and slide guiter numbers. A crowd that really enjoyed themselve gave hi a stanging ovation and go one encore before the house lights potted up.