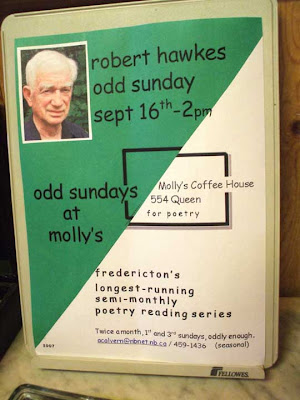 Open Set: Bring lyrics, drama, fiction, a recipe for mustard pickles—or just plain poetry—to present in the open set. If it is created from words, you can read it.

2 pm on September 16, at Molly’s Coffee House, for an afternoon of poetry. For information: acalvern@nbnet.nb.ca or 459-1436. Yay New Brunswick, Canada’s poetry province!