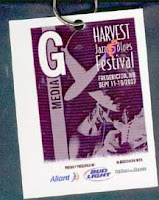 I gather that the opening gala by Arturo Sandoval, Tuesday night at the Playhouse (essentially the same time as The Tragically Hip concert & my radio program) was great. Even if I've not been on air 7-8 pm and then queueing 13.5 hours of canned programming I couldn't have gotten into the show because the Harvest media pass doesn't allow that, or entry to the Gov't Mule show on Thursday.

The "Free Festival Kickoff" happened last night in the Mojo Tent in Off. Square. Place was backed for the STU Jazz Orchestra but thinned out considerably during Cimarron. If Cimarron have started with their great Cuban- and Brazilian-stylings they might have grabbed and held more of the crowd [but, let's face it: Wednesday night means Thursday is a work or school day for most people; and the gusty winds blowing into the tent were chilling.] Cimarron started with jazz numbers more closely aligned with that just performed by STU Jazz. 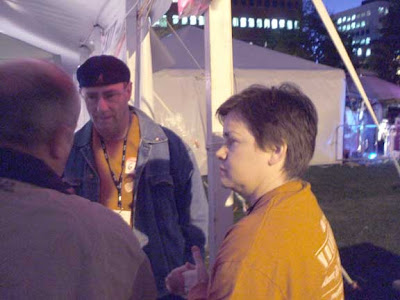 Volunteer "security" in the Mojo Tent was being provided by members of New Brunswick Filmmakers’ Cooperative. [I'll be volunteering there tonight for "A Tribute to Dutch Mason".] In the above photo: Cat Leblanc and another NBFC member at one of the exits. 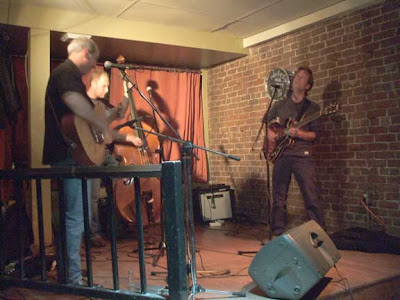 After Cimarron, I went up Queen Street to The Capitol to talk with Thom Swift of Hot Toddy. They were there doing their fifth annual Harvest opening night show. It was a good one. Joel broke a string. They played a mix of now and old originals and covers and, by request, "Junkyard Man". Then all three band members went upstairs to Wilser's Room and joined Dub Antenna onstage for their set. Place was slammed with people—even the patios, despite the cold wind a blowing. I left at 1 am, already today, knowing I'd be having another full day and night ahead.