I tucked away my media pass as I walk across the grass toward Cat Leblanc, both of us converging on the Mojo Tent. Cat's title at the New Brunswick Filmmakers’ Cooperative is Director of Membership Services. I've known her since before I moved to Fredericton in 1990. Cat is better than "good people" . . . she's great! 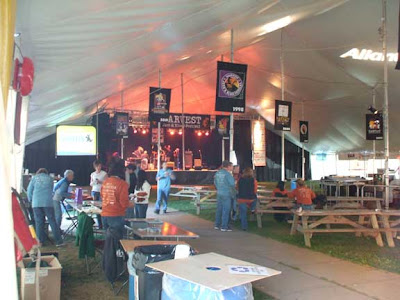 Inside the big tent there a sound check onstage and various of the volunteer and paid festival crew moving about. Volunteers must check-in to get the event's pass, shirt, and orientation. On tonight's NBFC volunteer roster, I replaced Cat's man, Tony Merzetti, who was in the Film Co-op offices working on the annual big kahuna Canada Council application. 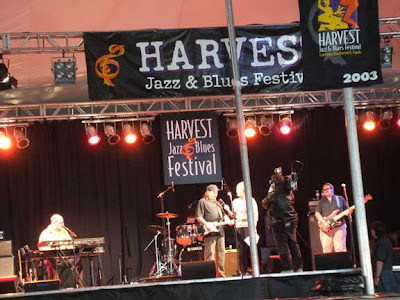 When Cat and me first slipped in the tent, Matt Minglewood & band was on stage. I then saw a cameraman and Starr Dobson, co-host of Live at 5 (ATV-CTV) onstage. As we watched they all straightened up and did a life feed into the show: brief interview before Matt and the boys launched into a song for the listeners at home throughout Atlantic Canada. 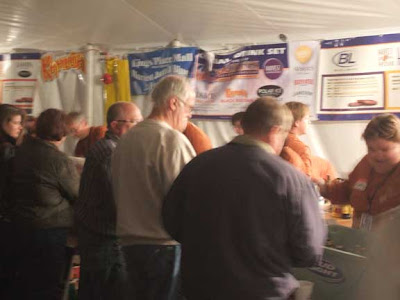 During the real show the tent was packed to capacity. One of our security duties on three of the five exits was to count people leaving as that count controlled how many new people could be permitted to enter the tent. What seating there was filled quickly, and the bars started doing a brisk business. My older cousin Roy in the picture above of the bar closest to my station at an "emergency exit only". 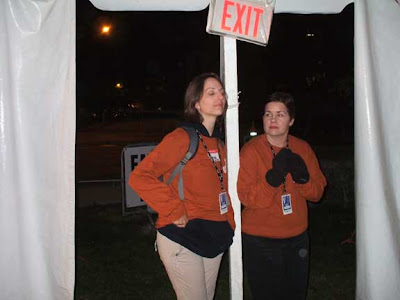 Two of the Film Co-op strong-arms on security: Corena Walby & Cat Leblanc. Things might have gotten ugly if Cat had taken her gloves off. "EXIT" is a Fire Marshall regulation of all buildings permanent or temporary. Most people didn't see the tent to be the "building" it is so they read "EXIT" to mean a normal entryway. We needed so many ways of saying "no" both to people inside the tent wanting to step outside to smoke, or leave drink in hand as if it wasn't a licenced premises same as any bar [we were visited by the liquor inspectors and uniformed police], and to people wanting to enter the tent right there, instead of through the one controlled entrance. Good thing was that we rotated through all the exits and even had breaks with a volunteer's lounge with bbq dogs and burgers and stuff across the Square.