Wednesday night after the first Hot Toddy set at The Capitol, I talked with Thom Swift, and arranged to meet him in Off Square outside the Mojo Tent to record an interview. The sun felt great, as I waited, but the breeze had a chill when I was in shade. ATV-CTV and CBC TV both had satellite upload-link trucks in the Square for coverage of tonight's Tribute to Dutch Mason. Nice.

Thom walked across the grass, brand-new CD in hand: Into the Dirt 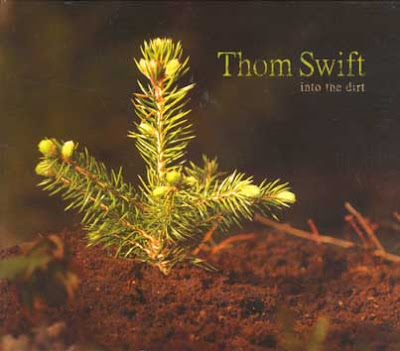 With the hum of the two broadcast trucks and all the pre-show busy, Thom and I retired across the street to a quiet corner of Molly's with a pint of Pumphouse S.O.B. I plugged in the equipment, recorded Thom's voice over for a CHSR Station ID, then—after a number of questions and answers—hit a snag. Discovered the machine was still on pause—real difficult to read the dull black of grey-green digital display—and we needed to restart the interview. We did.

Good thing is that we're known each other for many years so it was easy to get back into convo about the festival, and touring in general before swinging around though songwriting circles and workshops to advise to new songwriters. We discussed Hot Toddy and their plans to tour France next month and to record a new CD. And, of course, we discussed Thom's first solo CD, Thom the songwriter, Thom the frontman, and the free open air show 3 PM, Friday, 14 Sept in Officer's Square, 375 Queen St, in the Harvest J&B Fest.

When the interview airs it will be edited and spliced to include the song "Healer Man", a tune Thom wrote with his brother in the Canadian Armed Forces in mind—all the dangers and dangerous places in the world that he and so many other forces personnel have put themselves into, including Afganistan.

shirt: Harvest Jazz & Blues Festival Volunteer
loc: postshowhome
temp: 5 C
sound: ? . . . how about quiet inside / with some movement above / in pita sandwich maker's apartment / and post shows festival people on / the streets and in clubs
Posted by Joe Blades at 1:37 a.m.