It was Congo Square Family Experience day in Officer's Square (moved inside the Mojo Tent because of the anticipated rain that started while I was there). The tent was solid with families: kits getting facepainted, or they were helping paint a mural, or they were painting T-shirts they could take with them once dry, or they were doing other arts & crafts. Plus there was a "musical instrument petting zoo" with a long snaking stream of kids getting hands-on with a fiddle, horn, small drum kit, and likely more that I didn't get to see. 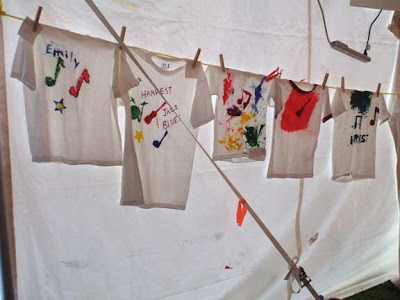 There was also an entertainment lineup. I only saw Dr Rev Robert Jones (photo below) with his Dobro steel guitar. He's a blues educator and was in 16 Fredericton-area schools this past week. Whew! That would be intense work. Even here he opened with a song to demonstrate that one of the purposes of folk songs is "to remember" . . . and he was talking-working with all the kids in front of the stage to sing along their parts. Some success but most of the tent wasn't paying attention to him because of all the simultaneous creating that was happening. 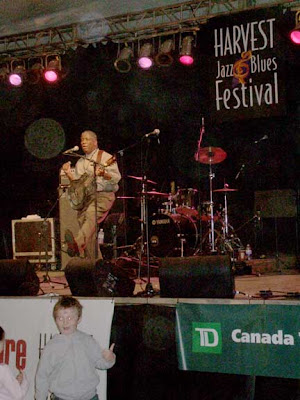 Also part of the Congo Square day, in the Barracks Square tent there were music workshops for the kids: harmonica, hand drumming and more. Was neat to see such open encouragement.