Q: Why did the turtle cross the toad?
A: Because the road was moving slower than the turtle. 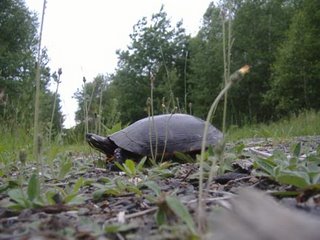 Swimming above ground, out of water, in thick humid air . . . I was out for a bike ride before I became waterlogged and stuck in the accumulating sediment . . .

Turtle in the photo above was on the trail near the frog park. Moving along at its turtle pace. Still a danger to hit with a bike, one as bad as the tree trunk swerved around behind the building now housing FAPO, the one used as the set for cafe scenes for my acting role in Neverville: Population 101 (LunaSea Films, 2002). It's a surprise to see a turtle here. Haven't seen one before. So I take a few pictures and ensure that it's safely off the bike trail before I climb back on my SCA steed and head into town.

Reminds me of Talks-Too-Much's "No shit, there I was . . ." story of being on a US military base in one of the western states; a weapon testing ground: They had been driving along a road through the desert when the convoy came to a halt. TTM, ever curious, got out of his vehicle to learn the reason for the stoppage. Asked the driver and was told that a tortoise was crossing the road and they had to stop for it. [Can't you just see the headline: "Tortoise Halts US Army Advance".] This tortoise was recognized as an endangered species, the area its protected environment—yet both are inside a military base! TTM thinks wtf and returns to his vehicle shaking his head in contradictory wonderin'.

I'm impressed by the ability to be able to snap the turtle. The last one I saw near water (15 years ago) moved pretty quickly for a slow species. I am also impressed with the ability to stop while in the frog park. Last time I was THERE, the flying blood suckers were out in extremely full force. Standing water. Good breeding ground.