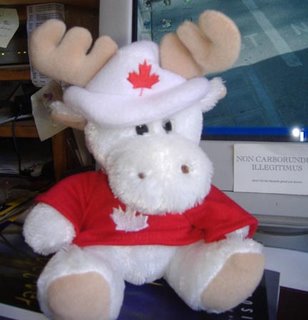 Drapeau du Canada dans la fenêtre. Little Joe Canada Moose sitting here thinking of his cousin overseas. No, not the ones on the island of Newfoundland—though they did travel over water from New Brunswick to The Rock. No he's thinking of Moose in Senta, travelling about with Lara on the big adventure, her walkabout.

I need sunblok and water, need recharged batteries and camera, need a bike ride before England v Portugal in a World Cup football quarterfinal game @ noon—that 61" HDTV @ The Taproom with great beer on tap, need food and a shower, a close shave.

Yo, Canada, this is it! This is your day. Happy GST Reduction Day! Wear some red and white! Do a little flag waving! Give a whoop or two!

It's a beautiful day. I'd fire up the barbecue if I had one. I'll be missing a Canada Day weddingTV special across the street—red and white baloons line the centre aisle. Instead, after some footie watching, I'll wander through the crazy riverside cram of Fredericton's annual Canada Day blok party with two music stages (Hardcore Trubadours one of the two main acts, rocking old country tunes done well), food and stuff vendors, kiddy rides, a "green" parade in late afternoon, fireworks at 10:30 over the river as the concerts end. It's the biggest crowd gathering of the year in this town. They claim it's the country's largest neighbourhood block party.

ahhhhh! missin' someone..it's what's happens when you'are not there..and they are not here..

when i was very little girl, my mamie would give me presents of "teddies" given to her for me from her boyfriend's.. they smelled awkward but mamie said..it was ok because she loved him..the teddies still smell...

staring out the window, travelling on my mind, soon to make a big leap over the water, a different window, a new view, a garden