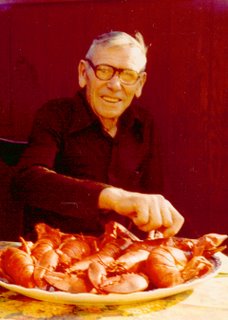 If my grandfather Charlie were alive, today would be his 100th birthday. Gramps loved his lobsters, his rum and cigarettes too. The photo above is from one of his birthday dinners when all of us lived in Dartmouth (I recognise the windbreak wall of the deck tucked into the corner between the garage and the house at 34 Swanton Drive above Bell Lake). The lobsters were likely caught by the boys in the fishermen's reserve in Seaforth off highway 207 on Nova Scotia's Eastern Shore.

Memories of Sandy Point, St George’s Bay, Newfoundland by Phyllis Pieroway from stories told by Charles Warren Pieroway was first published in 1996. A second edition was published by Broken Jaw Press in 2004. It's an oral history: Charlie's rememberings of growing up, living and working on and out of Sandy Point, on the West Coast of Newfoundland. Recorded after he was 75, it was transcribed and written-edited, by his daughter, my mother.

“Rich in useful insights into the working life of one ordinary Canadian, this book demonstrates the need for more such accounts.”— Canadian Book Review Annual

Charlie was born the year after France ceased to control fishing and more on the south and west coasts of the island, the French Shore. Sandy Point had been home to thousands of industrious, hard-working people. For many years, it was the capital of the French shore of western Newfoundland. Sandy Point was the centre of trade from Cape Ray to Labrador until it became one of the Newfoundland provincial government's emptied outports. Charlie worked in the woods and on boats that sailed from Virginia to Labrador. Among many other jobs, he was sometimes a lobster buyer who would also sail a schooner, of the Bluenose-type, from Sandy Point to Boston with a hold filled with live lobsters.

In 1948, with his wife Freda and their daughter Phyllis, he immigrated to Canada and settled in the Cole Harbour-Dartmouth area of what is now the Halifax Regional Municipality, Nova Scotia. Charlie died in 1992 at age 85.

shirt: Sears buttoned brown work shirt (Was Charlie's. I've kept it because it was his shirt, not because it fits me. It doesn't. I'm larger than he ever was so it's really too small, too tight in the arms, armpits, across my chest.)
loc: BJP off
temp: 16 C
sound: Pogues Waiting for Herb
Posted by Joe Blades at 8:29 a.m.

I think that Charle and Phyllis Pieroway are related to me.... are you aware of anyone named Parker or Elvira.