I took the bus to Toronto for my Art Bar Reading Series performance at Victory Cafe on 30 May alongside Jan Conn, and Jane Munro. [I'd been at Jan's first book launch, for Red Shoes in the Rain at the Westmount Public Library in Montreal in 1983 days after I'd returned from four months of travel in Western Europe and Great Britain.] It is a long bus trip, 18-hours, from Fredericton to Toronto. Left F'ton at 8 pm. Arrived in Montreal just after dawn, just in time for a Hershel's petit dejuner while waiting for the bus to Kingston and Toronto. It really is too much travel time and bus time but the CC readings program travel allowance isn't sufficient to cover an air can return flight. But I journal write, even commit poetry, while a passenger like that. The reading was good and the honorarium works for me and mine. A little net income is a good thing.

After the reading, conversation and a publications exchange with Mick Burrs [Mick's latest chapbook is (among the discards) (Walking Image Press) a hand-sewn number in an edition of 82 printed from a master produced on an manual typewriter]. I kipped on Phlip's long, wide couch. Shared his livingroom with his now 5'6" corn snake in its cage.

The next morning, since I had the time, and as usual, wanted to see something of Toronto, I decided to walk to the bus station. Where the road circles around the provincial legislature building. I came upon this felled streetlight. 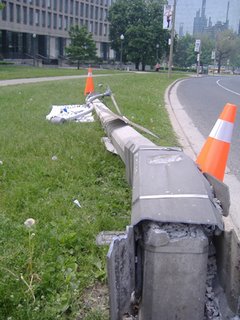 On it was a banner, written in uppercaase, advertising a tv series: TO LIVE WITH Culture. The blue "TO" a reference, oh so clever, to T.O./Toronto itself. The banner on the next streetlight pole is pictured below: 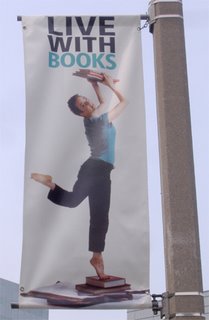 Deal with it: live with books. I don't go on pointe when I carry books (usually I have too many books in my arms) but to each their own . . . 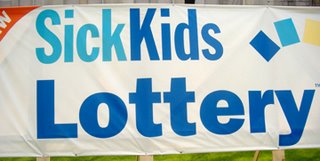 The organizers of the Sick Kids Lottery have good intentions but seem to have lost their sensitivity. Who wants to gamble with the health of sick kids? Hopefully, not the doctors or the hospital. Most certainly not the parents of the kids/patients admitted. 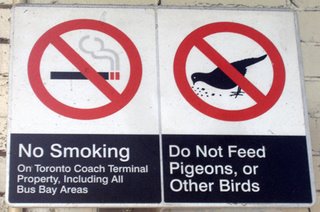 No one I know goes to busy coach terminals, bus stations, or garages to feed the pigeons living inside those buildings. I suppose that what they want but do is say "For your security and safety, please don't litter. Please place your food remains and other garbage in the receptecles provided. Any unattended food will be destroyed by our trained security personnel." The province is also just starting [finally!] its "Smoke FREE Ontario" legislation.

Below is another not thinking: www.orleansexpress.com should be fine as a website address except that it has sex in the middle (and unexpected sex distorts the message, often confusing the reader). Once sex is identified the last part becomes "press" and in a publishing house so the rest become "Or Lean Sex Press"—some sort of alternate choice diet sex publications?—which seems like a different ball game that the buses of Orleans Express (or perhaps not so different (?) since it's not happening on the bus. Then there's their other bus pictured here with the slogan "The Company with the Kilts". 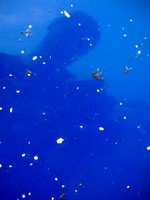 After a spectactular thunderstorm in Montreal, wth mega lightning and torrential rains, I made it back to Fredericton to tell the tale. A little bug splattered and gravel chipped from the endless highway [re]construction. Ready for real sleep in a stationary bed (until I'm on the road again).