Sounds like cannon fire nearby hauled me from deep sleep Saturday morning. The electricity was off. Too early. It was 5:45 by my watch. I heard beeping from the next room. Discovered that it was the computer's backup power supply, and shut the thing down. Couldn't make coffee. Couldn't blog. Emergency lighting in the hallway beeped at the building's exits. They worked. Nice!

I went outside with my journal and camera. The traffic lights were working. Must be a very localized outage? Should have had a long-sleeve shirt; the humidity cool on my arms, cool on my smashed thumb from last night's stepladder accident in Liz's yard while I worked to add structure for the grapevine growing overtop of the kitchen door's steps. 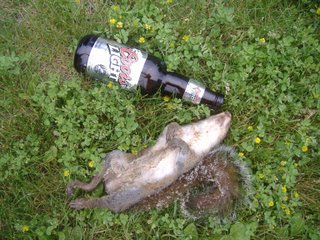 @ 6:40 an Energie NB Power truck turned onto George and moved slow. I saw an opened laptop in the passenger seat. It stopped by the graveyard. Buddy got out and looked up. With a long, hooked, extendible pole he pulled on fuses above clustered transformers. After turning the truck around he drove closer, to the corner of George and Sunbury, only three houses from my building.

There he found the cause of the outage: young punk squirrel died running the wires. Fell beside a Coors Light bottle, or was he carrying it, drinking it while doing his final high-wire act? Tripped two fuses going down—not goin' down alone. Goliath won this time. Squirrel's tail clearly singed. Shows that drinking Coors Light can be fatal. "If you drink this, you don't get it!"—mock Alpine slogan.

Friday, too-early morning, the day's disruption was a saw cutting cement sidewalk across the street. The start for a crew drilling all day for natural gas 'cause that church wants some. 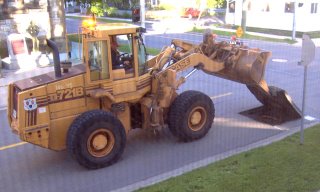 Thursday morn, just after 6 AM, it was a city road crew cutting around, digging out, and rebuilding, "raising" manhole covers on my block of George Street. Summer solstice mere days earlier, and road construction swings into gear before the school years ends, before the main tourist season starts. "CAUTION: Raised manholes" means that sometime in the next month or two they'll be back here with dumptrucks and that machine used to chew a strip of road surface ashfelt beside last summer-construction season's curb & gutter. Hopefully, they'll get it recapped, paved before the next school year starts . . .

I know I shouldn't laugh at a poor squirrels demise, not to mention your lack of power, but, really! Rodents should know better than to drink that swill! Serves him right.