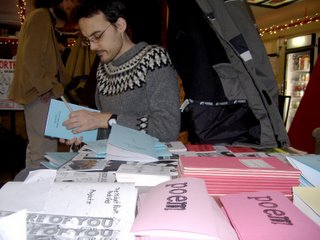 There's a large table of hemp necklaces and jewelry stuff. Some soft journals, T-shirts, a Moonsocket CD and 7", Free Thought by the local Social Justice League, Monique with her portrait service, a girl—Dawn-Aeron Wason—with a zine, Sublime Creatures and chapbook of poems and stuff, magnetic buttons.

I put out some stuff including the Some Stuff . . . NCRA-published chapbook. Am not likely to stay here untill 6 pm. It's not that active. But it is good to see. At some point the live entertainment will start performing in the corner behind my table of stuff.