Nancy Burke, we hardly knew you 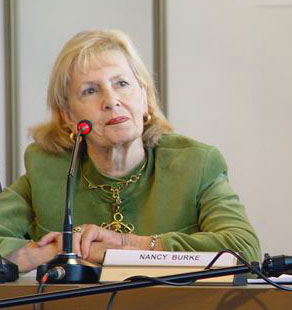 Yesterday, I received an email from Vesna Lopicic, editor and co-translator of the Slike iz kanade: Tri kanadska pesnika (SKC Nis, 2005). Vesna wrote to tell me that Nancy Burke, one of three poets in that book, had died a week earlier on 12 February 2006.

I've only known Nancy Burke this past year via email and through an exchange of our poetry books, just the time since we started working toward the Slike iz kanade book. The book of Nancy's included in Slike iz kanade was Wypalona Ziemia / Scorched Earth (Torun: Algo, 2003) her third book of poetry published in Poland with en face translations by Polish poets, this time by Ludmila Marjanska and Ewa Elzbieta Nowakowska.

We met in person for the first time at the YACS conference in Nis, Serbia in Oktobar 2005. Nancy, along with Fraser Sutherland and myself, was one of the invited artist guests. In addition, Nancy was chosen to be the keynote speaker with her paper "'A Dichotomy of Consciousness'—the problem of identity as expressed in short stories by ethnic Canadian writers."

Nancy had lived and taught in Poland since 1990, and had been Director of the Canadian Centre at the University of Warsaw for the past 16 years. We had talked about the possibility of me visting there and even getting poems translated into Polish because of our shared Serbian book.

Last week, Nancy died after a supposedly easy operation on one of her legs. Very sudden. Very unexpected.

Aw, that's too bad. Sorry to hear about this.

"Very sudden. Very unexpected."
True. I received a grade from her on the 10th, and we talked about how she is going to come back to the University the next semester (she looked unwell and had been sick for the past three weeks). When I heard about her death I was devastated. She was a great teacher and a wonderful personality. A great loss.

Nancy has been a part of my family's life since I can remember. I put her up there on the chart with Jackie Onasis and Audrey Heburn. She was intelligent, beautiful, passionate, expressive and kind. She was a great mother and a giving friend. While we weep for you, dear Nancy, you had a fine and huge life that left a thumbprint on everyone you knew. We were blessed to have you here and we will never forget you. Be free.

When I got the news of Nancy's death I flew to Warsaw to attend her memorial service. This is what I wrote at the time, although it is just a note to myself, or a buzz in my ear:
NANCY

Jay McInerney wrote that we tend to “look at each other in elevators more, partly because of that sense that these might be the last people we see.”

The sensation that we may be riding on an elevator on a journey through the unknown makes us more aware of the person next to us, the blurred face that gains a contour as we tend to grow older. Nancy was writing her memoir, I don’t know if she had finished it, but the accumulated history of images in her life surely brought a fresh start for her on the page. In a way, she recreated a lasting memory that rode with her to her death, sparking “random thoughts,” as Nancy put it so well in her poem

Random thoughts
on Sunday evening
in a cold, unfriendly city
far away from home
where people pass
with frozen faces
and the sky is full of gloom.

Was it I who chose this country?
Did I see a different place?
Now the wind blows dirty papers,
striking me across the face.


Her words come from her mind way of the heart, fresh before history accumulates.

Nancy was one of the last faces I saw in a Warsaw crowded café close to her university. I would like to think I looked at her “more” so that the Warsaw wind may blow her sparks my way and leave me to ponder how we can best outlive our angst.

Thank you. You're the second person within a week to contact me concerning Nancy Burke.

Hi Joe:
I'm sorry about the misunderstanding about the comment posted by Daniel. I guess I should have clarified that I used a different email to post my comment (Luz Rezende)because your blog would not accept my regualr email to login. I don't wish to have another email other than my current one, which is msn. I guess this comment will go under Daniel's name too, although Daniel never met Nancy. This is just a clarification and not a comment on Nancy. luz

It's been four years exactly since Nancy died, but I still remember her sitting at the Warsaw café table, ordering a salad, speaking lively about her students, her poetry, her plans to retire in Europe, her travels, and her pleasure in meeting new and old friends. And above all her love for her family and her young grandaughter in Moscow.
I just wanted to say I miss her presence and friendship.

thank you, again. I've just learned that Nancy's friend and colleague Vesna Lopicic, at the University of Nis, is wanting to publish a thank you anthology that will hopefully include Nancy's work

Would have been 80 today.
Sometimes we avoid thoughts that we know bring pain, so we subconsciously forget, only to be occasionally awoken like from a dream with a panicky realization that it is permanent. Life goes on and waits for no one, the stragglers are left behind. We are all connected to others in one way or another, and when life forces us to continue running down the road, we turn our head to see those that have stopped.. their image fades the further we run.. we run and we run, there is no finish line in sight. Then at some point we are forced to stop as well.. and lying there immobile we look with grief at those who are getting further and further away from us. What a senseless race, bad joke..
Unless we are not really separate runners at all. An abstract whole that we don't really yet understand..linking all of us together in one continuous column, the energy that burst long ago to create our life runs through us and I am you and you are me, inseparable no matter what the cosmetic appearances of body and mind might portray. You are not gone and never will be, neither are those who you lost.. when someday someone crosses that finish line of the human marathon we will all be there together, lifting our arms in victory, the joy of life love complete, a big family together forever.