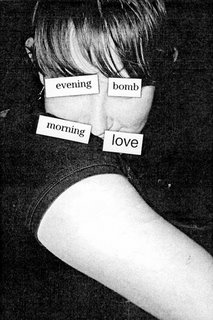 Found stapled to a tree in the Old Burial Ground between Brunswick and George streets, Fredericton. Found while I was en route to another Noche Latina fundraiser at Wilmot Hall on Carleton. Photocopy of a 4x6 photo with Magnetic Poetry words (three from one set; one from another) on a treetrunk to the left (toward Sunbury) behind the marker to fallen colonial-times British soldiers as I walked the Carleton to Carleton footpath through the downtown graveyard.

the person in the photo looks familiar. I think it may be a photo by A.
Could I be wrong?

Anything is possible. Nothing on it identified the photographer or subject/model. We could ask A. if they've been doing these. . .?

It's not by A but by a friend of A. I met her on the corner of York and Brunswick rthis past Firday and she asked if I was enjoying her work.