Another slippy night in Fredericton. I started the show with "side two" of my recording of the Multilingual Reading of the Side by Side Festival of Literary Translation / Côte à Côte festival de traduction littéraire 2007 featuring various artists/poets/readers including Jean Babineau, Euge Dietrich, Jesse Ferguson, Nela Rio, Hugh Thomas, Whitefeather & son Eliah (photo below). 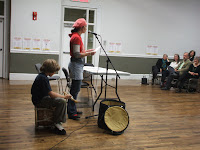 After reading a mess of press releases, emails, and PSAs on various upcoming Fredericton art things including the Writing Home exhibition opening 1 Feb (7–9 pm) at Gallery Connexion and its Postcard Fiction writing workshop to be led by Jo-Anne Elder on 2 Feb followed by a reading w/ Open Mic . . . after all that I read the Robert Burns poem "To A Mouse, On Turning Her Up In Her Nest With The Plough, November, 1785" for his birthday anniversay this coming Friday, 25 January. 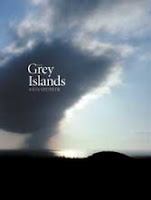 Last quarter of the show was a feature from The Grey Islands (Rattling Books) by John Steffler (listening time: roughly 2 1/2 hours. ISBN 978-0-9737586-0-3). Narrated by John Steffler and (in order of appearance) Frank Holden, Janis Spence, Deidre Gillard-Rowlings and Darryl Hopkins. Soundscape recordings made on islands off the coast of the island of Newfoundland. Originally published in print form 1985 by McClelland and Stewart. Now published in print form by Brick Books.

"Canadian poetry at its damn finest," I say. "What a book! I've loved it since I first hear John read from it, and I still love it."