John Heinstein, Biff Mitchell, and Sam—son of founding ex-BlackTopper Old Skull—made it through the triplet of locked doors challenge to appear on the first Ashes, Paper & Beans of 2008. Even I got caught between the tricky locked double doors of the SUB main entrance and had to phone campus security repeatedly to get them to come and clear my way. 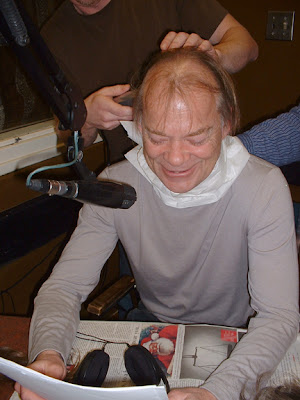 Show started with Hugh Hazelton's "Emergency" from the CD-livre La vache enragée (Planète rebelle, 1998). John and I read several poems each. On air, Biff lost his hair—head hair, not body or ear or nose hair, not even his eyebrows—while reading his "One-Eyed Jezebel" prose poem-story. John, rather than the absent WhiteFeather—worn out from cleaning her French Revolution birthday+New Year's eve party remnants in Studio4ward—wielded the scissors and electric razor. He's not heard of live haircuts or head shaving on radio before so we may have committed a first . . . 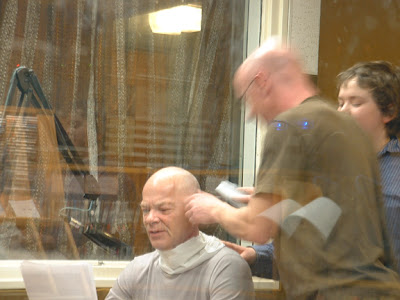 Sam took photos with Biff's camera. I took photos with the old Fuji 2600Zoom digital camera my parents watched bounce out of the back of a pick-up truck in the Wentworth Valley. When he wasn't removing Biff's hair, john took pics with his cellphone. Biff also took pics before and after his extreme haircut reading.