I started with the recorded readings by Joan Kjaer and David Hamilton of five poems from the anthology Poems from Guantánamo: The Detainees Speak (University of Iowa Press, 2007), edited by Marc Falkoff. Poems by Jumah al Dossari and other detainees. ISBN 978-1-58729-606-2.

Following that I played "Talking Tourism" by Nova Scotia-based blues-storyteller Morgan Davis and the first two tracks—"The Gift" and "The Essence of Sweet Music"—off J. Nichole Noël's 2005 CD Verse . . . The Power of the Spoken Word in Music (The Write Words Production & Publishing). 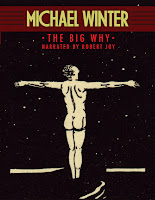 The second half of the show was the opening of Michael Winter's 2004 novel The Big Why about American painter and adventurer Rockwell Kent, unabridged MP3 CD audiobook edition published by Rattling Books (2007), as narrated by Robert Joy.