After the Poetry sPeaks show in The Club, the majority of us spoken wordies traipsed downhill to Props Pub. The multiple overtimes of the hockey game that Vancouver eventually won was on the big screen and regular TVs. 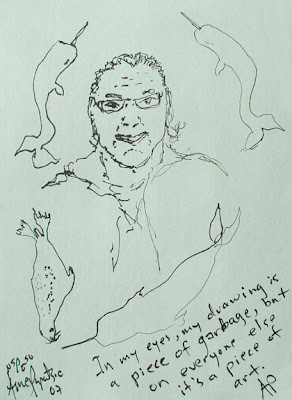 I sat down with Ame Papatsie from Pangnirtung, Nunavut first. He's at Banff four months for that animation project. He asked for two pens then, with one pen in each hand, did this quick sketch of me surrounded by three narwhales and a harbour seal. Amazing technique to watch: both pens moving simultaneously. He said he's been drawing this way since he was a young child. 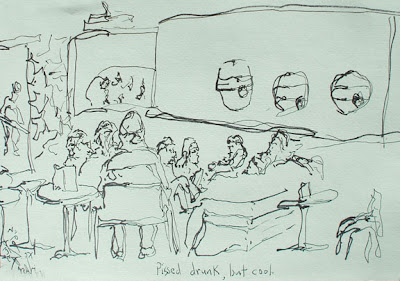 He then did this drawing of the pub scene with art [no, not art, but Big Rock beer plaques] on the wall, the hockey game beside it, and mostly spoken word artists. Ame also drew an Inuit drummer-dancer in my journal.

Good to see Ame's work is all over. Thank you.