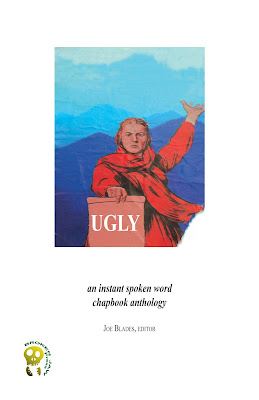 Next week there will be a new Broken Jaw Press publication on the table. UGLY will come out of this Spoken Word Arts Network [SWAN] residency group at the Banff Centre. Layout has been started. Two participants' work is already on their pages. The CIP data was applied for earlier this afternoon. ISBN 978-1-55391-063-3. The cover illustration is my riff on a sticker I collected ["Joe Bladesed", some would say] last year in Serbia. In Photoshop, I removed the Serbian text, and the sickle & hammer, from the sky and scroll. I love the socialist-worker-with-mountains-behind-him/her illustration.

Seems that we might also be working to make a compilation spoken word arts CD. One produced/published in time for distribution to member station attending the National Campus and Community Radio Association/l’Association nationale des radios étudiantes et communautaires (NCRA/ANREC) 2007 conference to be hosted by CiUT in Vancouver in June. To be released by Ian Ferrier's Wired on Words out of Montreal.