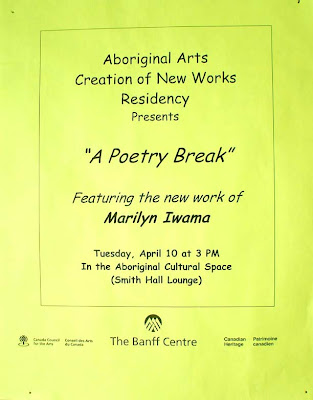 Took a break from other stuff on the go, a non-scheduled day, and went to Marilyn Iwama's reading. I'd last seen her when we were in Lunsden at the Sage Hill Writing Experience. Marilyn lives in Wolfville, Nova Scotia.

This aft we were a small yet interested audience of 10 listen to very new poems (the last one written as a letter to Rita Joe, unofficial poet laureate of the Mi'kmaq nation, since her death last month). Others were several years old but all in the same manuscript that Marilyn was her to complete. Now she has to find a good home for it. She knows of one prairie publisher interested in seeing a manuscript. With permission, I recorded her reading for future broadcast on Ashes, Paper & Beans. 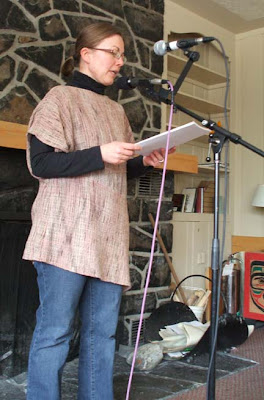 Many of the audience were Inuit artists here for their own residencies and projects including animation workshops in AfterEffects software. We were all given copies of a Banff Centre CD We Are Full Circle: an Aboriginal Women's Voices concert (2003). In the spirit of giving Inuit artist Ame Papatsie, then gave out copies of a recent (2006) carved-soapstone block print (edition of 25 on rag paper), titled "Foreward", of a hunter in kayak approaching a small iceberg. I shared some poem postcards . . .