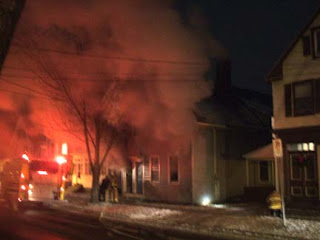 there were flames shooting out her front door when i stepped out of my building on the corner . . . hoped to get a picture but, snuffed quickly, I only managed to shoot smoke . . . really old woman lives there on George Street just off York, house beside the home of George of George E George Footwear . . . she's generally not seen except for some garbage Thursdays. UNB anguish dept prof woman w/ dog who lives across the street rushes over w/ blanket long B4 fireman arrives with thermal space foil blanket. good on her. asshole dzo only has camera in hand. there might be student apartments or someone else in the second unit in the house . . . but I don't think they were home while this was happening.

Crap! I didn't hear a thing!