Give Us Your Best Shot 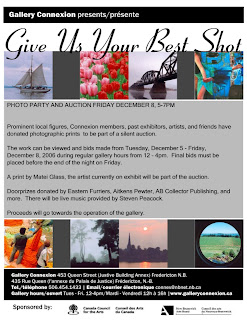 Dec 5/06—If you are looking for a unique Christmas gift, a hostess gift for this season's parties or something to decorate your home or office with, then try Gallery Connexion's Give Us Your Best Shot silent auction fundraiser. Over 100 photos submitted by prominent local figures, Gallery members, past exhibitors, artists and friends of the Gallery are on display this week until final bids are placed from 5-7pm on Friday, December 8th. Subject matter ranges from vintage black and whites to colourful worldwide travel.

Volunteers, who mounted the 8x10 photos into glass clip frames, were inspired by people's travel photos to exotic places such as South and Central America, China, Ireland, France, Italy, and Australia. "We have photos of Nicaraguan dogs, and an Indian snake charmer," says Carol Collicutt, chair of Gallery Connexion's Board.

Submissions came from notable photographers in the community including Brian Atkinson—a professional photographer known for his international photojournalism, and Peter Gross—head of photography department at the NB College of Craft & Design.

Local artist and former School District 26 art coordinator Clive Roberts submitted a beautiful collection of black and white photos from his travels during the 1940s. The images of people of Tibet, India, and Nepal are reminiscent of vintage National Geographic.

"We have a photo submitted by playwright Norm Foster, taken during a recent visit to Fredericton," says Collicutt, "and we have an interesting photo of Lieutenant Governor Hermenigilde Chiasson taken by Joe Blades." It was taken from a television set during an interview and includes English subtitles.

"Some of the most interesting images are a collection of black and whites by international photographer and scientist Dr. Reginald Balch who died in 1994," says Collicutt. His son Norval submitted the photos. Reg Balch, born in England in 1894, moved to Canada in 1913. He studied and worked in Ontario and New York in the field of forest entomology. He was appointed officer in charge of a federal government facility at UNB in 1930.

He traveled and photographed in Europe and Ireland and went on to publish two books of photography with Goose Lane Editions called, A Mind's Eye and Celebrations of Nature. His images also illustrate a book of Alden Nowlan's poems. "These are unique photos," says Collicutt. "His son is working on a book for the NB Provincial Archives collection of his father's images."

His photos range from the whimsical 'Girl Swinging' and the 'Nuns Picnic' featuring seven sisters in the deep woods near Mt. Ste. Hillaire, Quebec, to the eerie photo of an old barn near Sussex which was published with a photo of Alfred Hitchcock in Photography Year Book (London).

The photos are grouped in categories including; architecture, people, flora, fauna, and landscapes. There are pretty images of flowers including the world famous tulips at the Ottawa Tulip Festival, and amusing photos of exotic animals. Current exhibitor and internationally known artist Matei Glass has also donated a photo.

"We think there will be something that appeals to everyone," says Collicutt. On the night of the 8th, photographer Brian Atkinson and city councilor Mike O'Brien will give opening remarks. Live music provided by Steven Peacock. Food and refreshments will be served.

The Gallery, located at 453 Queen Street (back of the Justice Building), Fredericton, NB, is open all week from noon to 4pm for viewing and early bids. The photo party and final bids take place Friday, from 5-7pm with refreshments. Bids start at $10. Cash and cheques will be accepted. Proceeds will go towards the operation of the gallery.

For more information contact Gallery Connexion at 454-1433 or connex@nbnet.nb.ca
Posted by Joe Blades at 10:59 a.m.