Been working four hours (body still on Beograde time) when I hear sirens in the predawn. Look out the office window to see firetrucks on York Street slowing and turning onto George, passing me. A plume of smoke rising above trees. A police car pulls into the intersection of George and Sunbury as I cross Sunbury Street. 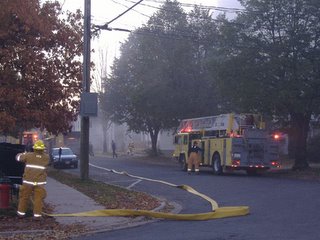 I'm walking east on George walking toward the firetrucks and firefighters just houses away. Opposite the Old Burial Ground. Go into the graveyard to get view of the house without causing interference. 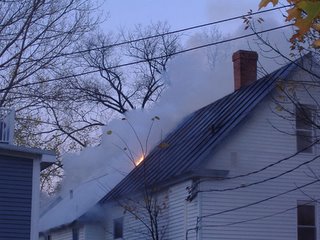 A house with fire inside its roof. Flames and smoke coming out. A Khoury-owned house. Student housing. The top floor apartment, where friends used to live, has been under slow renovations all summer and autumn. Full dumpster in the drive. 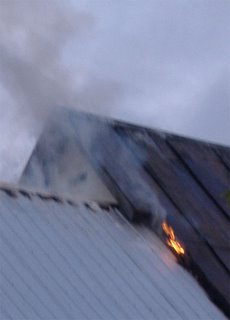 Now there's firefighters inside: gas masks, air tanks, hoses. I hear the chop of axes, the splintering of wood, the smashing of glass.

Wonder if something was wired wrong and the heating or something shorted?

Foam and water. Big fans to clear air. Paramedics on standby but I don't think the top apartment was occupied. Don't think anyone was trapped inside. The front of the house definitely is rented: lights on downstairs. Saw someone leave a unit in the back of the ex-house too. Five electrical meters on the outside wall.

I'm here before Barb Roberts for CBC Radio or any other media. See her as I leave to post this report.