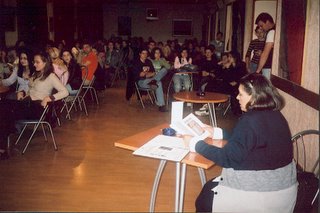 At her own table in front of us, our presentor for the book launch, Gordana Mitić Zivković, Urednik Studentski kulturni centar Niš. Vesna Lopičić spoke about the book project then asked us three poets to introduce ourselves and to read a poem or two in English. We gladly did so. Oddly, to me at least, there was no reading of any of the poems from the Serbian translation. 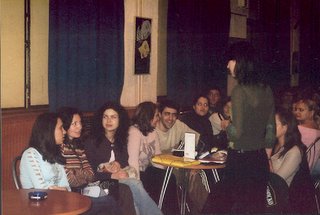 An audience shot from the stage. At least 70 people present, most of them students for the University of Nis. 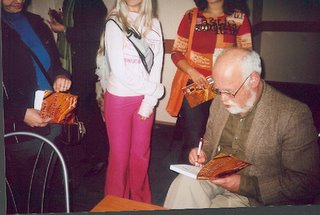 After the book launch we are rushed across town to see a play, Bop, by a Bulgarian theatre troupe, that is being hosted by SKC Niš. They had the curtain held for our arrival and then sat us in the front row. Staged in appearance like classic Greek theatre with everyone initially in white robes the play quickly incorporated Woody Allen-style comic elements, dance, and powerful singing with new lyrics to known music. Bop is god. It was very, very well done.

Afterwards we had drinks with the theatre director and a book publisher from the Bulgarian minority living in Serbia.

After that we boarded the theatre troupe's tour bus and went back to Klub SCA-a Na Pranvom Fakultetu. It was party time. They hauled cases of Bulgarian wine and brandy off the bus. Inside the club the table were put together for an incredible spread of mostly meats and cheese-filled pasteries. The smoked ham was incredible! The brandy was the smoothest I've ever tasted. The tables were cleared away and dancing began, the music changed to more polkas, and two callers took to the stage to start organizing the dancers and calling out the steps. At some point I was dragged onto the floor and found myself in the midst of Bulgaria's national dance, one as complex as a traditional ceilidh dance, and there was I a dancing fool, right to the Inverness stomp at the end. Not something that I could have ever imagined myself doing, but this whole Eastern European adventure is not something I'd ever expected.

If you're interested, you can check out my book at "Significant Moments."