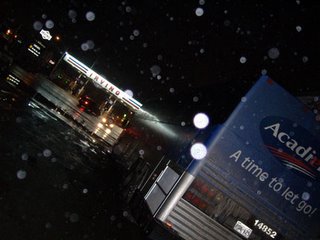 6:40 AM. H'Edmunston, New Brunswick. The longest part of the long night bus ride is done: It's all downriver from here. Unlike many other's I'm not going next door for a dose of Tim's diesel. Don't want MSGed coffee. There's been snow here in Edmunston. I first noticed it in Rivier-du-Loup but missed its first appearance while I slept. 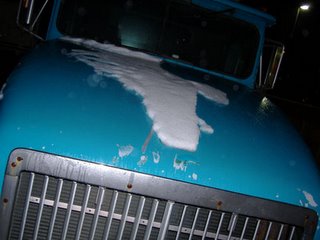 Takes 11 hours to bus from Montreal to Fredericton. Left in the return of scattered showers, only 4 C @ 10:29 on the Molson brewery building in dwntown Mtl.

All night I had the seat beside me occupied by a quiet sprite of a skater girl with at least a Truro destination ticket. 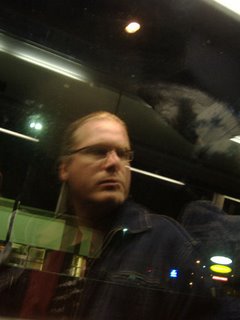 Either a real skater girl or girlfiend-something with skater-punk boys who look like Beastie Boys video extras except for their Slipknot shirts underneath "cool [something]" baggy hoodies. Her sniffs are torture: declines tissue; declines Advil cold & sinus; says it's just the bus air. I and everyone around her have 11 house of her sniffing several times a minute to endure.

About Woodstock she pulls out of her pack some accounding homework to do: Chapter 3, Serial Problem (cont.) Sniffs less while working the Debit and Credit columns. 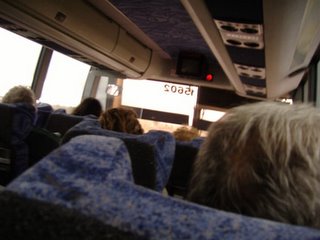 From here we've only a breakfast stop in Perth-Andover. A milk-run bus is simultaneously catching people and parcels in all the smaller towns along our route along the Saint John River. For a while we're out of the drizzle or low cloud scraping the river valley hills. 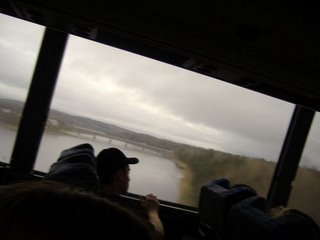 Q: Why do i take pictures like this?
A: Because they're bad tourist but capture the feel of our passage, not of our being anywhere.