a new New Muse of Contempt 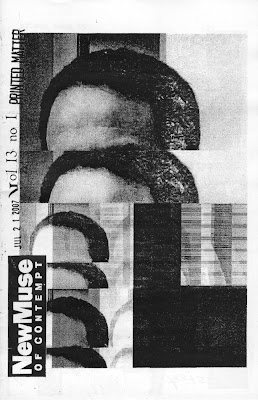 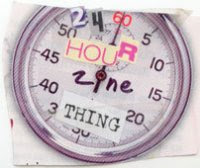 The webpage for the 2007 24 hour zine thing is up and running at 24hourzines.com. We're ready for your sign up if you're interested in attempting the challenge this year. And what a challenge! To make a 24 page zine in 24 hours from start to finish! You can sign up at any time, but remember that you need to complete your zine during the month of July.

About my NMoC mag and this unexpected issue:

The texts in this NMoC issue are all first drafts of poems in my ongoing "prison songs" series. Most were composed on my wee manual typewriter (a.k.a. the "bouncy thing"). They are ones I started writing on the morn of 21 July, after collecting posters in downtown Fredericton and selecting the posters whole and in part to become the foundation for the 2-up spreads of the zine pages.

"prison songs" is a series I started writing in July 2006 during a Fredericton Arts Alliance artist residency (one week) in part because Marko Kristić in Beograd, Srbjia, had told me while we travelled together to promote my book in translation, Pesme iz kazamata (i.p. Rad), that the title—translated from Casemate Poems could also translate back from the Serbian into "prison songs".