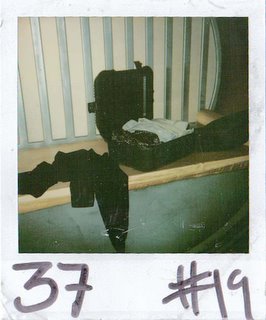 Continuity shot from a film shoot would be my guess. Found yesterday afternoon while moving loaded clothes washer and dryer during Liz's efforts to mop up the small flooding caused by the washer empying into a plugged frozen drainpipe. Water into the hallway instead. Disconected, likely accidentally, dryer vent bringing winter air into same hall directly onto the hot and cold water pipes for the washer. Polaroid photo print found in the lost in space under the washing machine.